In June we went on a little mid-week road trip from Cancun to Rio Lagartos in Northern Yucatan, Mexico. The main goal was to find millions of flamingos.

Leaving at around 8am from Cancun on our motorcycles, Arnan on his BMW F850GS and Jeanette on her G310GS, we of-course ignored the Quota (Toll road) and headed straight for the Libramento to Leona Vicario. A small town along the route. From there we followed carretera 180 to X-Can, an even smaller town just over the border of Yucatan state from where we headed North towards Tizimin – A midsize town with a nice old Spanish church and old buildings in the city centre. 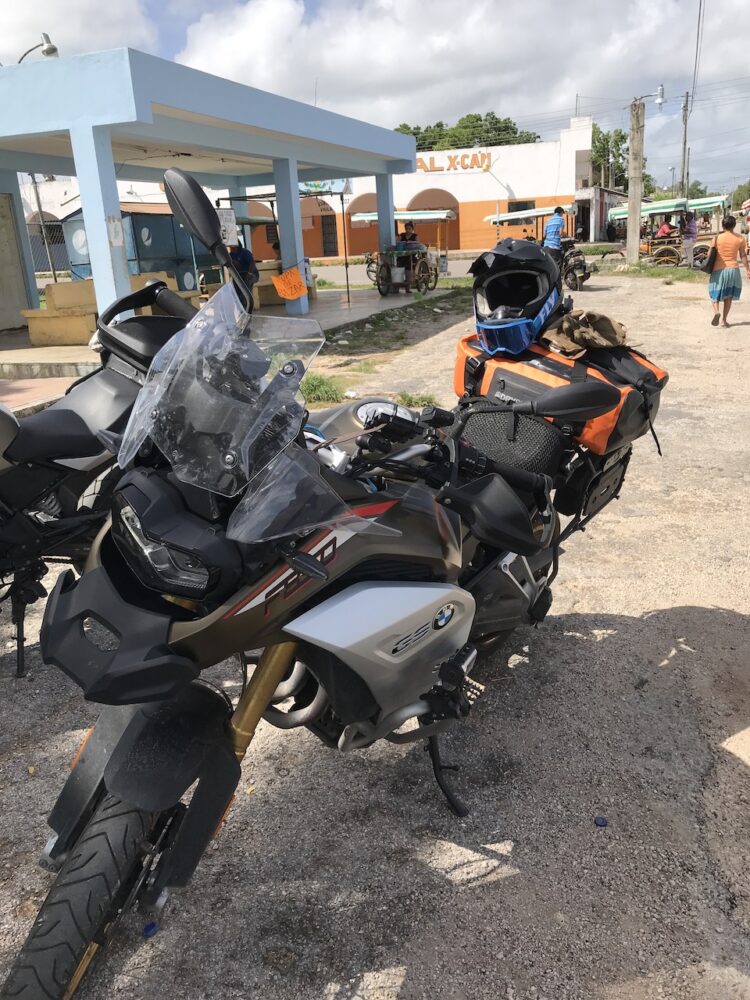 Just north of Tizimin is a tiny village called Kikil with a nice cenote and ruins of another Spanish church – Check out the Tizmin adventure on the forum for the location of those. But more importantly for this ride, lunch! 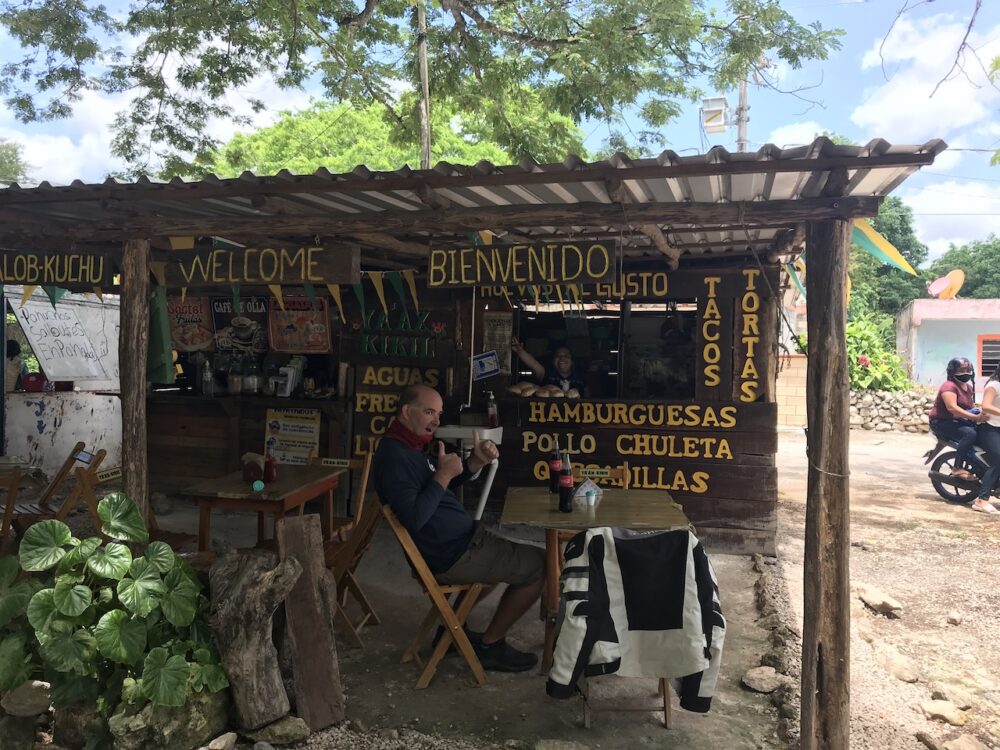 After our lunch we headed on through Panaba, which has the last fuel station with Premium fuel in the area, pressing on to San Felipe. A small town near Rio Lagartos.
Useful road signs being something of a special occasion in areas like this I took a picture of this one, which listed every destination on our trip. Some 20 kilometers to San Felipe from there, I think.

After a drink in San Felipe we finally arrived in Rio Lagartos in the afternoon. Just in time to catch the sunset, which looks like in the photo below. For our hotel I’d booked 2 rooms in the Villa Pescadores Hotel, right on the edge of the lagoon. Most rooms have a nice balcony and a view of the lagoon and nature reserve. With a summery breeze, this was great.
Just beware, the internet in Rio Lagartos is quite slow. Fleeting moments of 4G/LTE but mostly a sloppy 3G signal. And the hotel Wifi wasn’t much to write home about either. 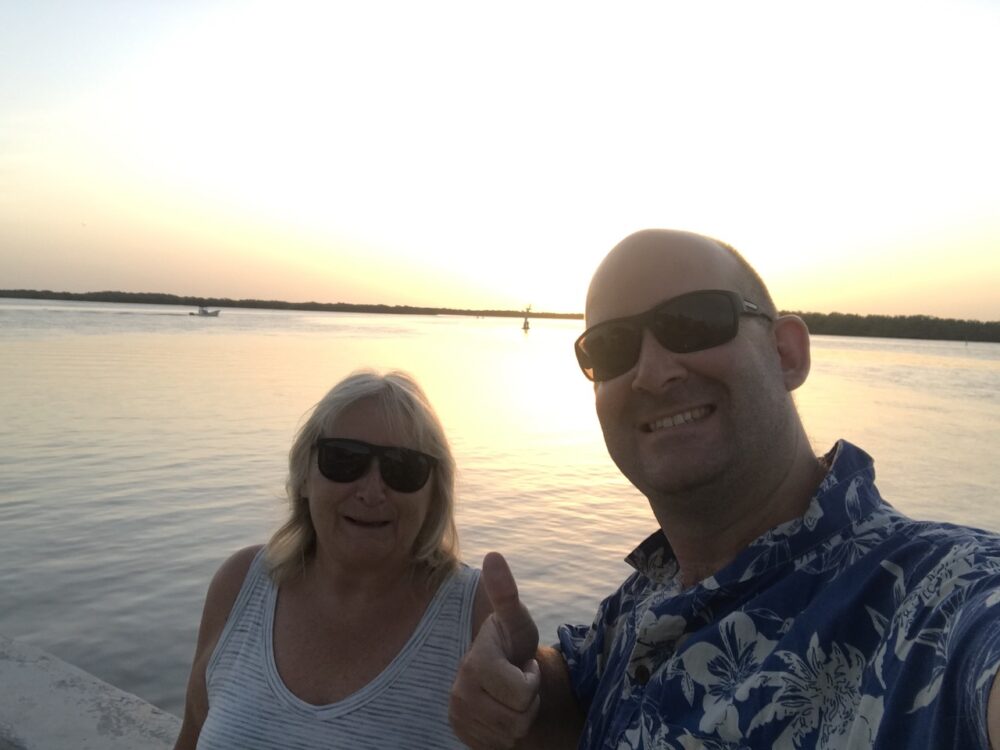 But where are the millions of flamingos… 🤨

Today was the day, I found on the map that near a nearby town called Las Coloradas the flamingos huddled together. Time to go bird spotting! Off we went. Arriving in the town, first we found the famous pink lakes and a cocky seagull. 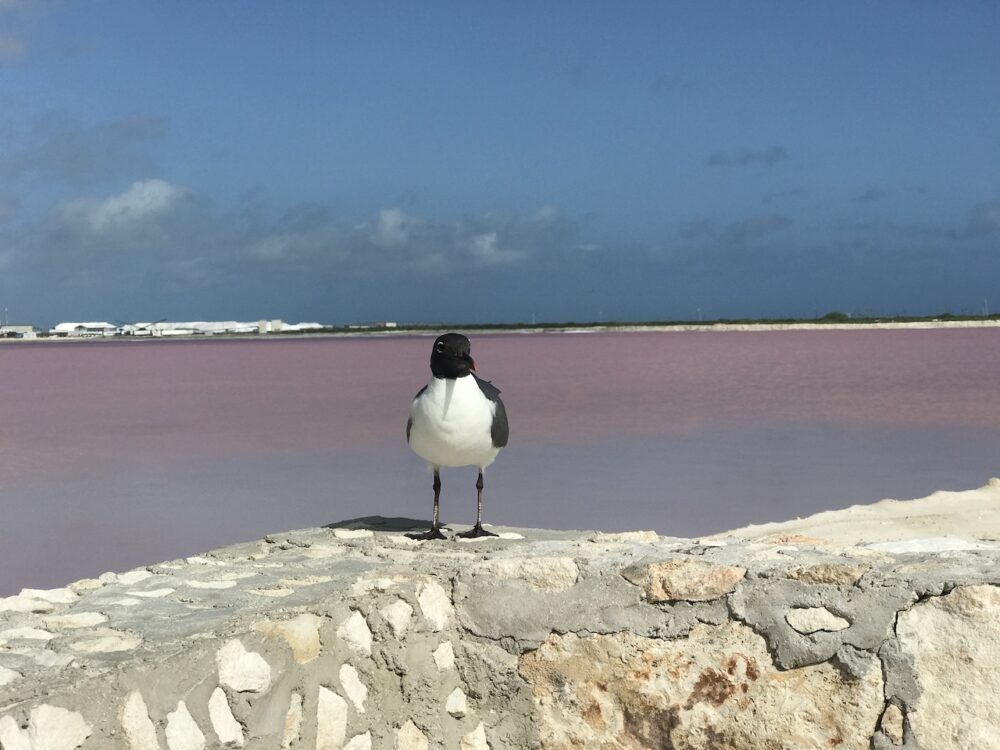 These lakes are pink because of the high quantities of salt. The company in the background harvests the salt as their product. To enter the area beyond the masonry wall and mote around the complex you can pay off the guard for $180MXN per person and wander their service roads for a bit and take pictures. But I didn’t think it was worth it. I could see the lakes just fine from where I was. But no flamingos…

Riding on along a sandy road on the other side of town we spotted some flamingos in the far distance. Pink specs on the horizon. Not even visible on a photo. We figured it was time to find a boat tour for a close up encounter.
Exploring Las Coloradas a bit more we found some swings and touristy letters but not much else. 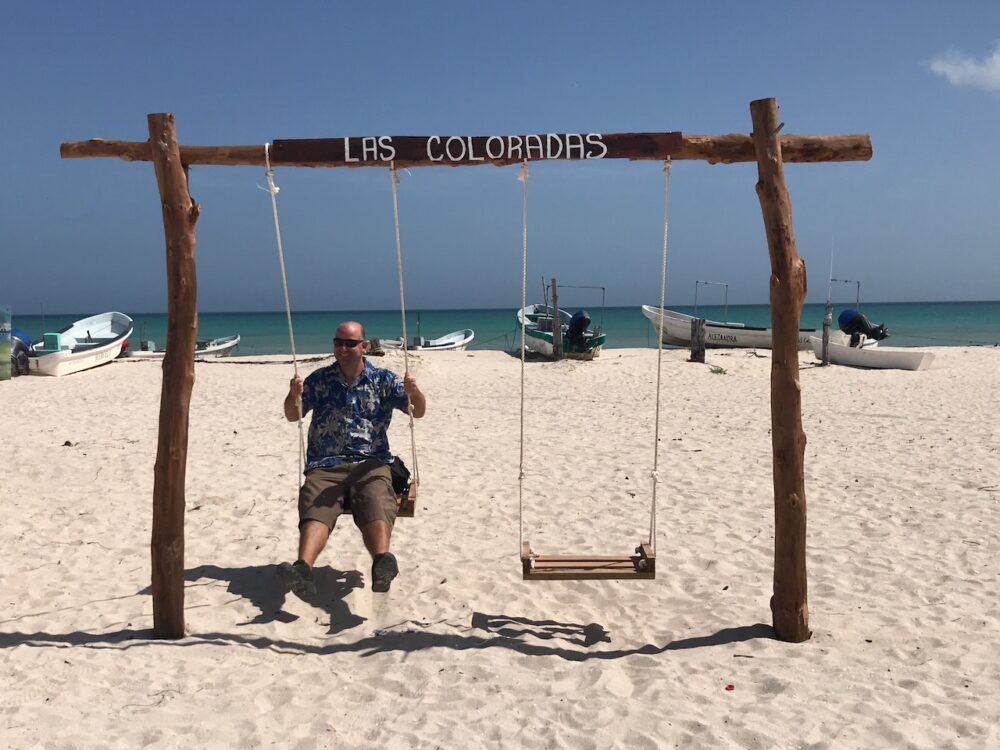 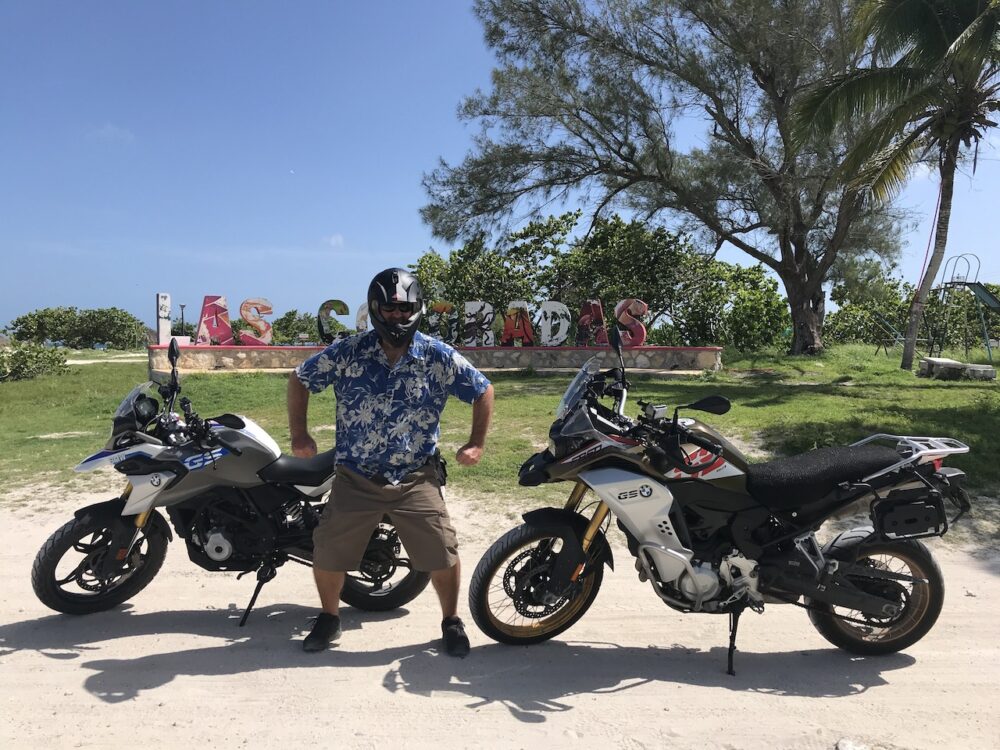 An easy day in and around Rio Lagartos. We explored the town and found out that it was a mostly run down fishing village with lots of closed businesses related to fisheries.
Undoubtedly a lot of the boats served a dual purpose to also ferry tourists around to go flamingo watching.
Lounging around a bit during the day we waited for the time for the boat tour, which Jeanette negotiated would start around 5PM. That afternoon we went to the Las Coloradas lagoon again, by boat this time. Following the twisty river from Rio Lagartos to find the famed flamingo colony! 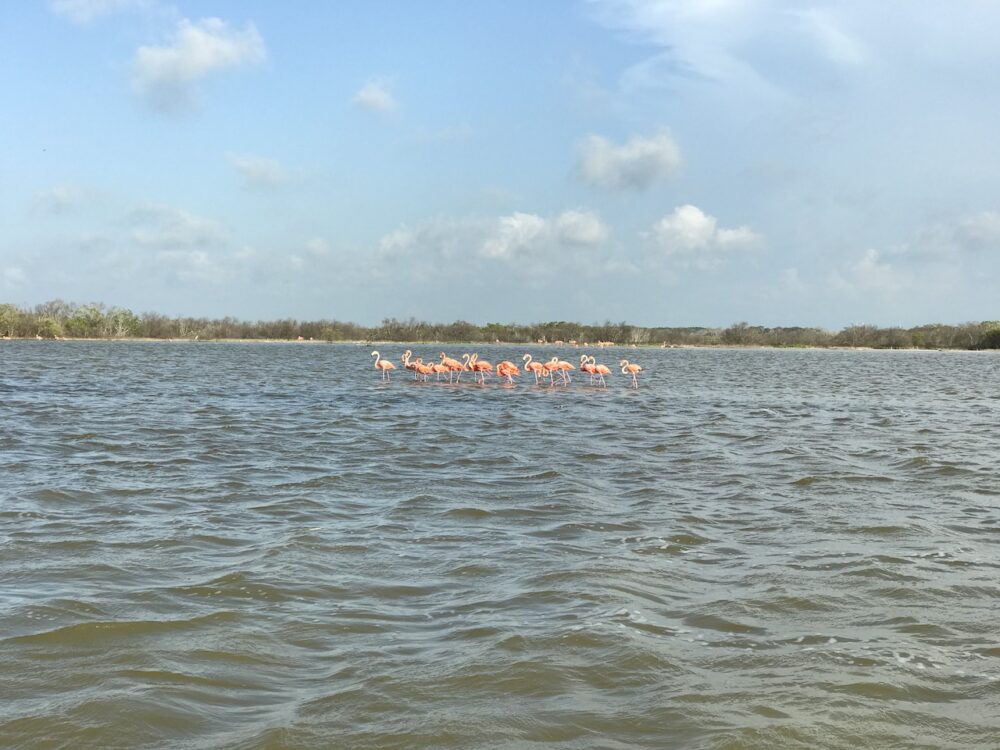 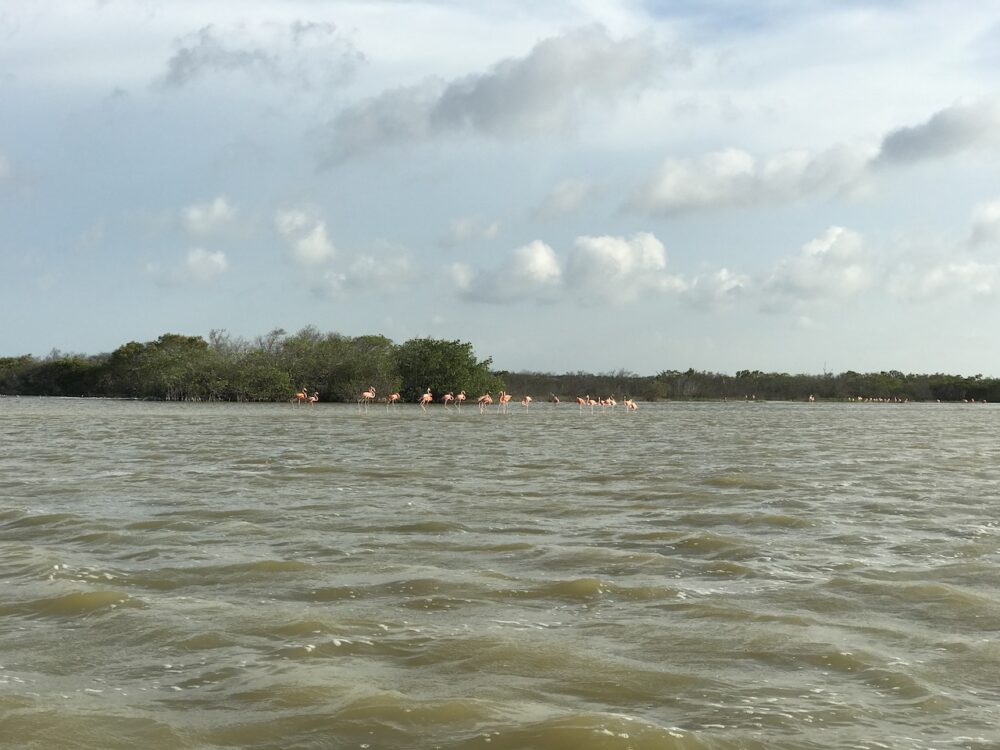 Time to head back to Cancun. I plotted a leisurely route back through rural Yucatan. We made a brief stop in El Cuyo and then rode down to Quintana Roo via Kantunilkin where we attempted lunch in a restaurant with no food.
We ended up having just a drink and relaxing for a bit before heading further south towards highway 180. Crossing over the highway and quota to a smaller road through the jungle that would take us to Puerto Morelos where we had a late lunch at Indian restaurant Namaste in the town proper. 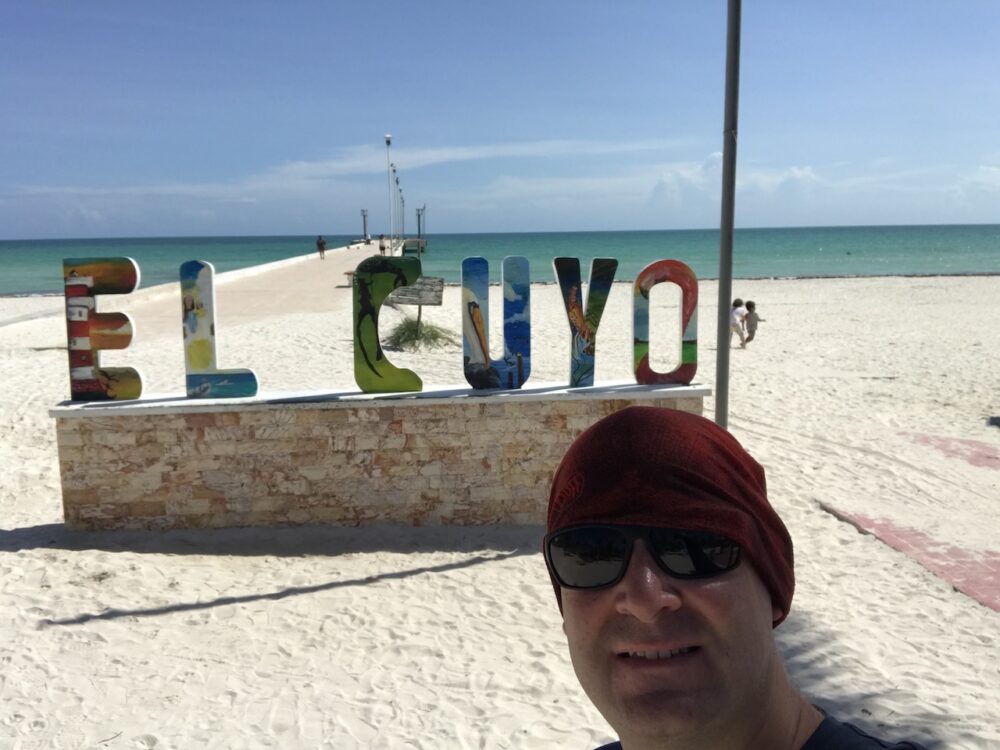 And finally raced the coastal highway north to Cancun. The highway was very busy, more so than we expected so this was a bit intense after 3 days of barely any traffic that goes very slow. But we managed and arrived in Cancun around 4PM.