We visited the Canyon in 2 ways. The touristy and common way is to hire a boat and go down the river which we did as a sort of part 2. But a little less common is a land route along the top of the canyon with some stunning views. We went up the land route first. This route takes you about 400-500 meters above the river and gives a great impression of how high the canyon really is. I have made a simple route to ride and off we went…

In the neighborhood of ‘La Esperanza’ you’ll find the entry gate to the Sumidero Viewpoints. In Mexico they call those Miradores. So here it’s Miradores del Canon del Sumidero. Entry onto the road is 50MXN per person. After that you’re let loose on the long winding road. Once you reach the top of the mountain range there are 5 miradores spread out over the area, along the canyon.

Unfortunately it was a bit cloudy when we were there, so at first we didn’t actually get to see much. Watching the clouds move about was fun too, and occasionally they would let up and give us a glimpse of the canyon below. 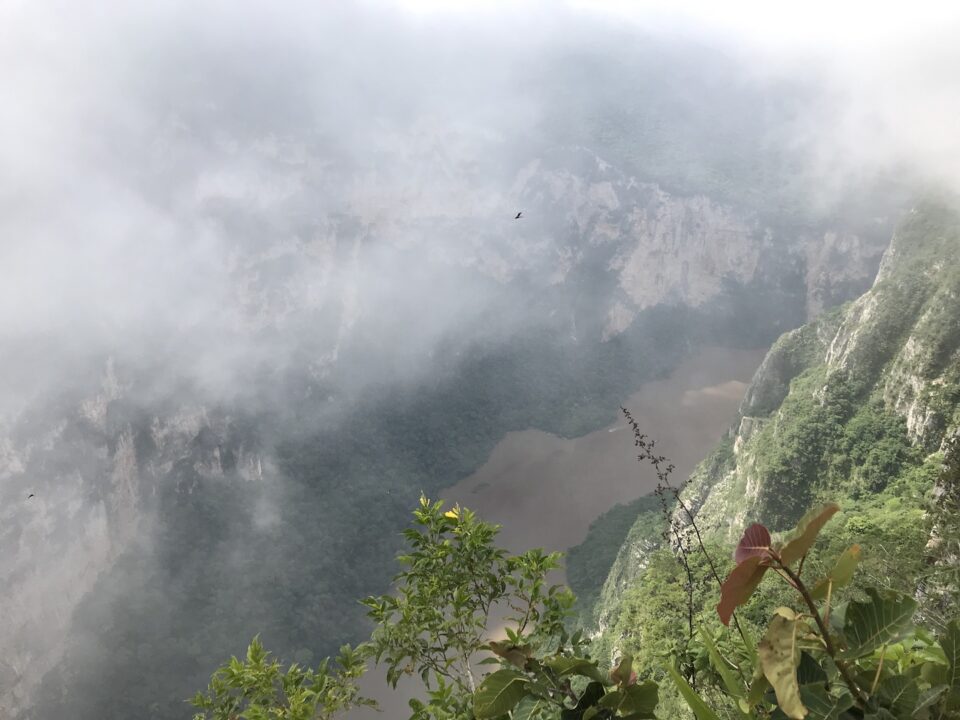 Driving to the other viewpoints took a while and the lower clouds were mostly gone then. So the view got better with every stop. Here you can see one of the tour boats in the river for scale. 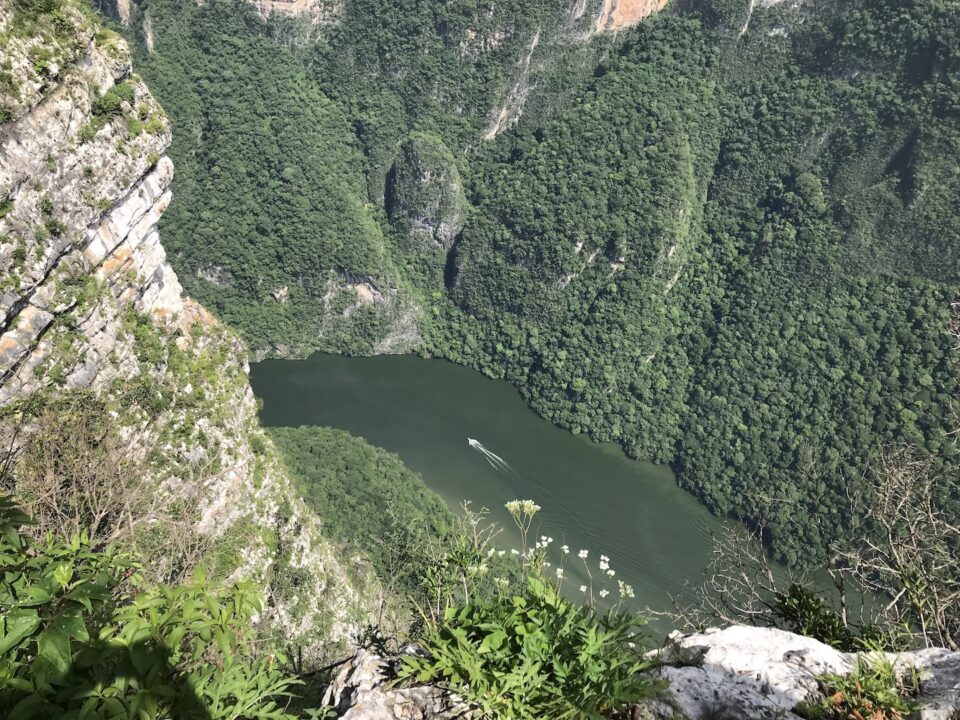 Finally we made it to the last viewpoint where the local government built a balcony kind of thing where you can see into the length of the remainder of the canyon. Unfortunately it was a bit cloudy again. But I managed to snap this picture. You can see another boat down there too. Later we found out these are 16 person boats. 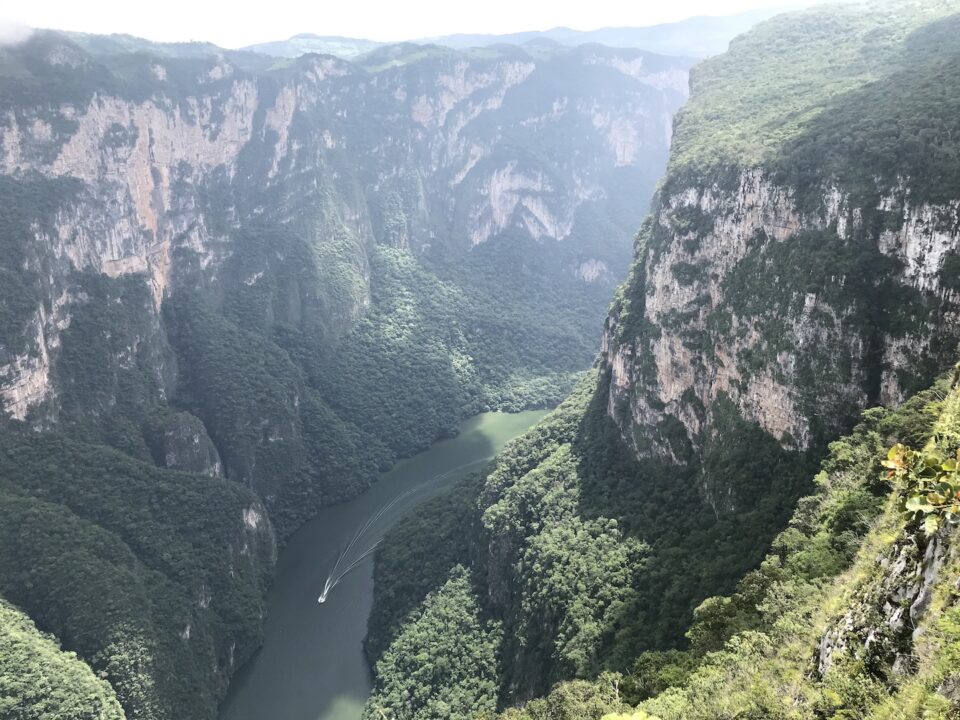 And after a while of enjoying the views and hoping the sun would burst through, we drove back down to the city.

After navigating the city and to the boat docks we contemplated which company to use. Google Reviews were of not much use since there are thousands of reviews and everything seemed fine. So we just went with the nearest one. Just outside Tuxtla Gutierrez. You can also get the tour further up the river in a little town called Chiapa de Corzo.

The place we used was an efficient setup, which is fine. But it also means you have to turn off your brain and just follow where they point you to. Which is a bit dumb and impersonal. We were directed from the parking space past the entry booth, to get a life-vest and into a boat in less than 2 minutes. All the while not really knowing what we were supposed to do or why and in what order. Just follow the pointing fingers.
Entry is about 540MXN for 2 persons. This includes a boat ticket, canyon ticket and taxes or something. We didn’t really get it and it’s not very well explained. But if you have the time to read the signs you can see how it all works. We didn’t get much time to look around, just follow the pointing fingers. 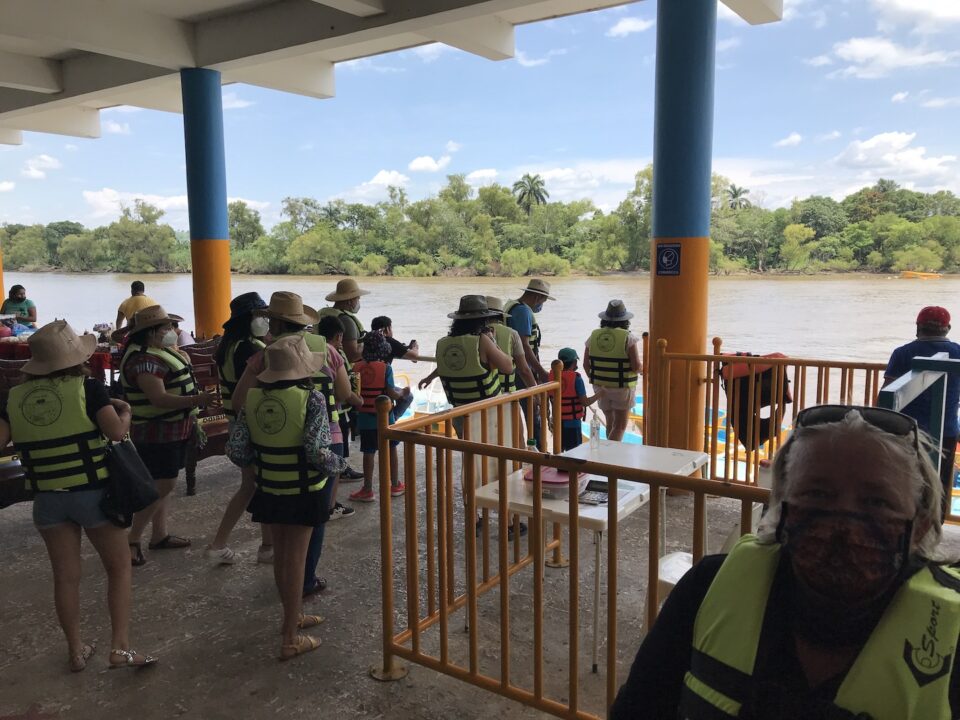 Anyway, we were lumped in with a group of hyped up Mexicans who were more interested in the boat going fast, screaming at crocodiles and making echoey sounds. As opposed to actually admiring the splendor and nature of the canyon. A thing our boatman was happy to oblige to. Luckily there weren’t too many crocodiles and other distractions along the route. So we actually got to enjoy the beauty of the canyon a fair bit. 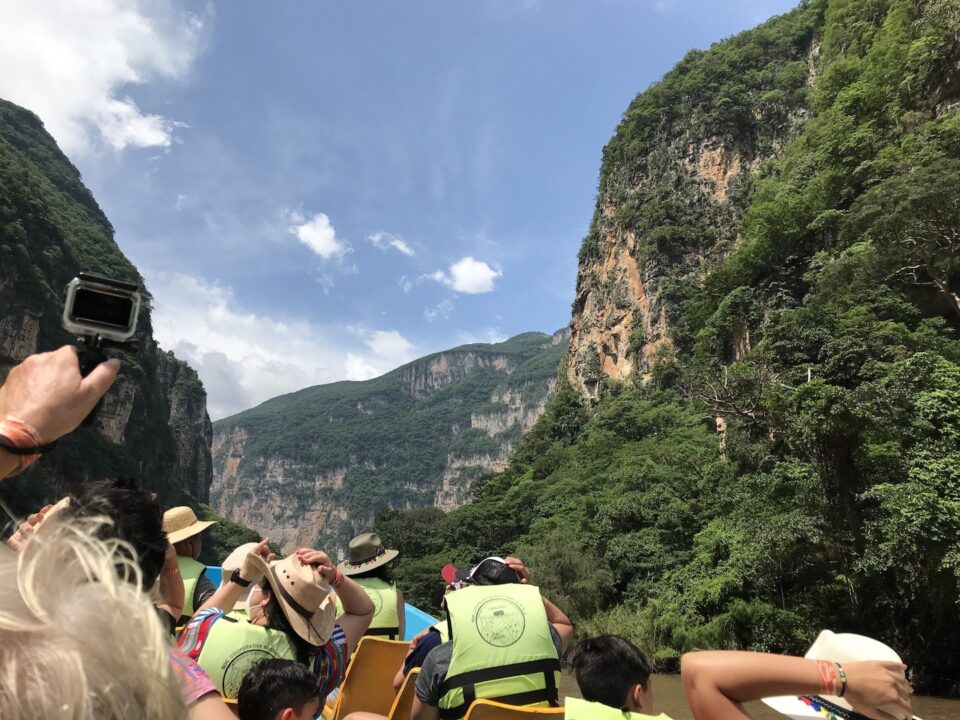 Hold on to your hats and cameras! As the boatman races through the canyon so show us all the nice spots. Explaining things about the colors in the rocks and special formations along the way. My Spanish isn’t too good, but that doesn’t matter. I just made my own adventure of it and enjoyed the views. Going between the steep canyon walls really makes you feel small.
I also tried to spot the viewpoints we visited earlier along the top, but couldn’t find any. 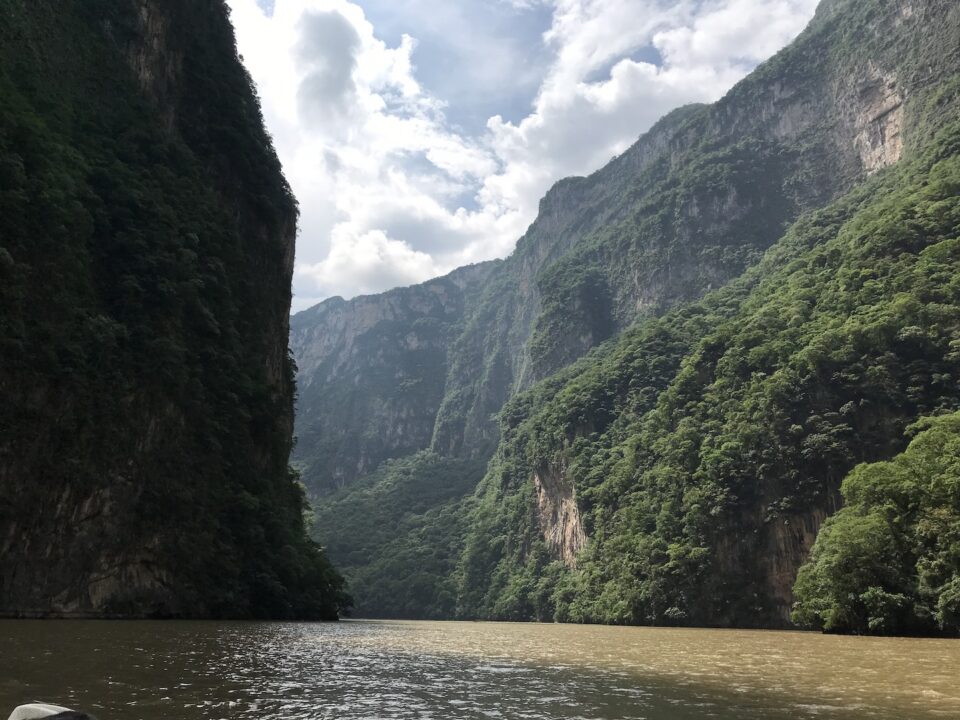 The canyon is twisting and bending through the mountain range and is about 20 kilometers long I think. So you can never see far ahead. This gives you a lot of time to look at the nearby stuff, large rocks and sharp edges are everywhere. But it also gives some nice effects when you round a corner and the canyon sort of slides open into the next section. 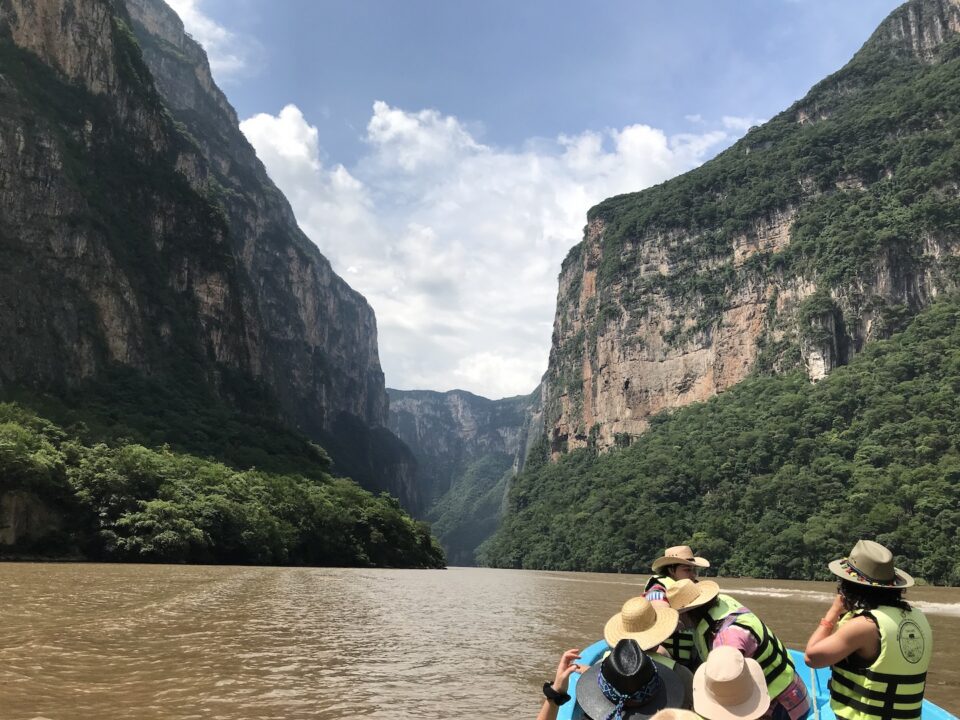 From time to time other boats would race past which created some big waves and excitement for the group of Mexicans as they treated it like a rollercoaster ride. 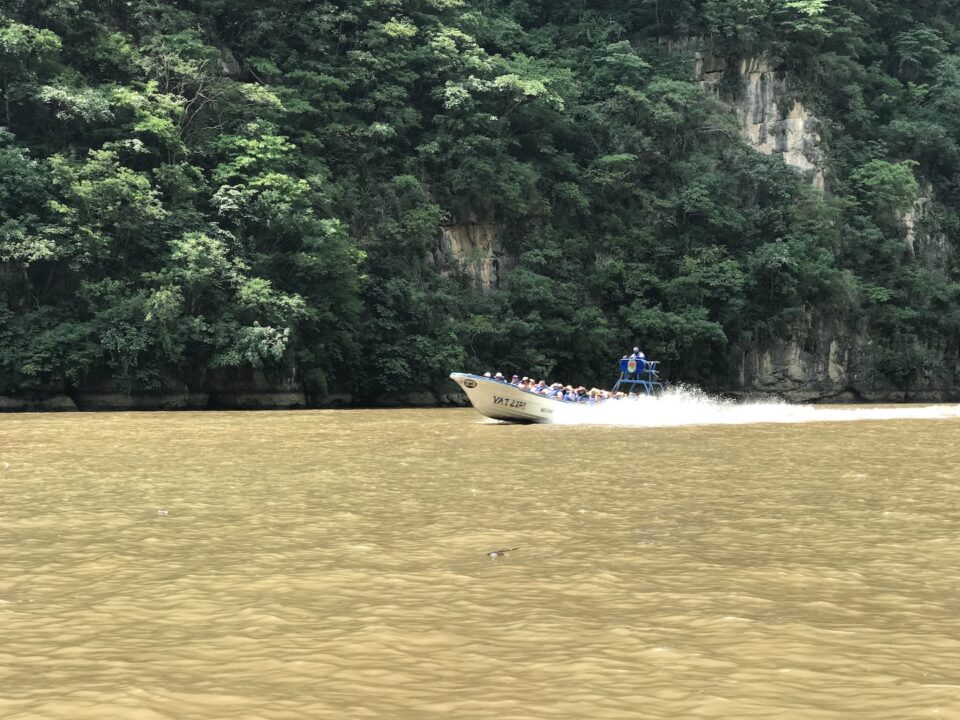 The whole tour takes about 2 hours. But at the end it was cut short a bit because of some heavy rain. Which ruined the boatman his opportunity to collect big tips.
Looking behind me there was some blue sky and just generally nice weather. 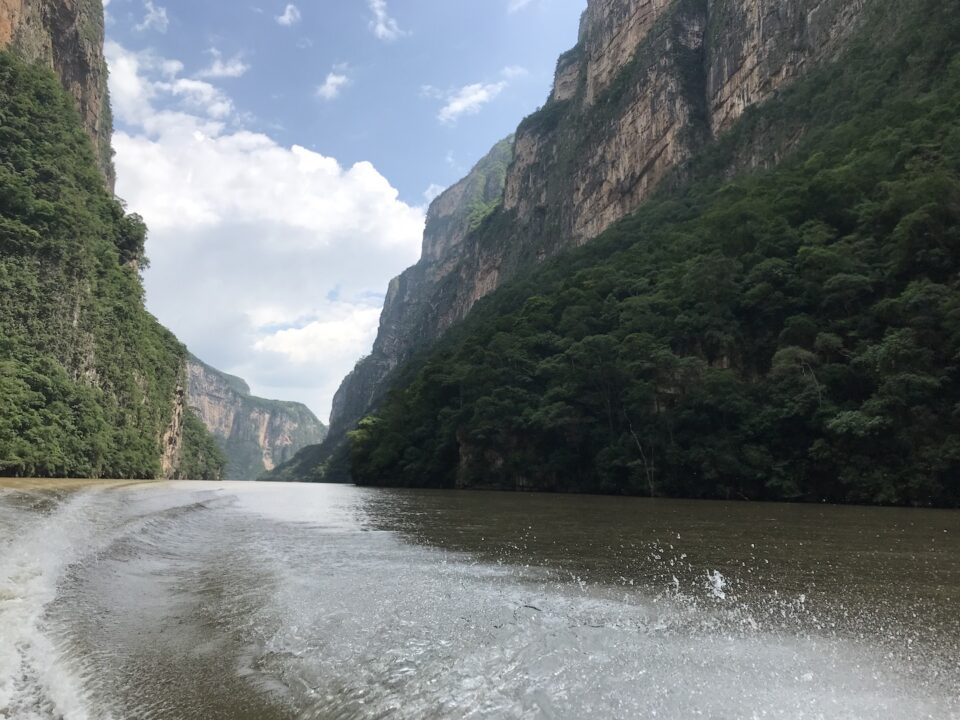 But, here comes the rain… 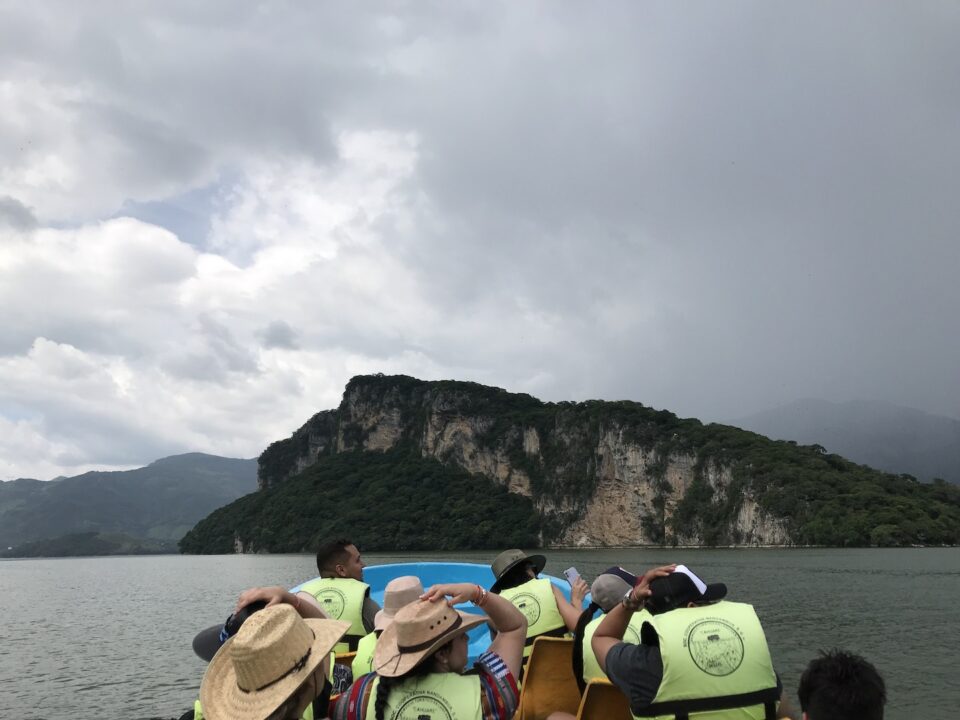 We manage to get past the little Island there, Isla Maria, and just as we arrived at the hydro dam at the end the rain started. After we all got soaked our thoughtful boatman found a big tarp for us to hide under. This prevented us from seeing much on the way back and was generally a clumsy setup. The boat going fast, wind catching under the tarp… You get the idea.

Overall, a great day with stunning views around every corner and over every ledge. If I were to go again I’d try a different tour operator. Perhaps one in the town up river. And if possible I would like a private tour, or smaller group.