Between 2015 and 2019 I lived in the Philippines. I ‘learned’ how to ride motorbikes there. And discovered I really like riding around and exploring things on my own terms. In 2017-2018 having travelled around the country a bit by bus I changed over to doing so on a motorbike.
This two part story of our roundtrip through the Philippines is a summarized version of events and highlights. This is part two.
Joining me on this adventure is Jeanette from FloatingCoconut.net.


Riding through the Philippines is a great adventure. On this round trip we traversed over 2500 kilometers, crossing 8 islands and hundreds of small towns and cities along the way. All in true Filipino fashion full of excellent unspoiled nature and scenic views, full of inefficient systems. Having to navigate chaotic ports and busy highways at times.

You can download all routes and tracks here on MotoTravel if you’re interested to ride (parts) of the adventure yourself.
All routes include Points of Interest which list hotels, restaurants, fuel stations, port services, shopping areas and attractions along the way. Just some things we visited and liked and want to recommend to you.

In part 1 we drove from Tagaytay on Luzon Island to Dumaguete on Negros Island. In this part we’ll head north again towards Puerto Galera on Mindoro Island, which is near Manila.

From Dumaguete we followed the coast on the south towards Bawayan and finally arrived in Siapalay City. Which is not a city at all. The municipality is called that way though. In reality the town of Sipalay is a rural underdeveloped place with some nice beaches. Most famous for its Sugar Beach a little to the north. But also popular is the Sinagon Dagat park. A hilly area with water and unspoiled nature to explore. 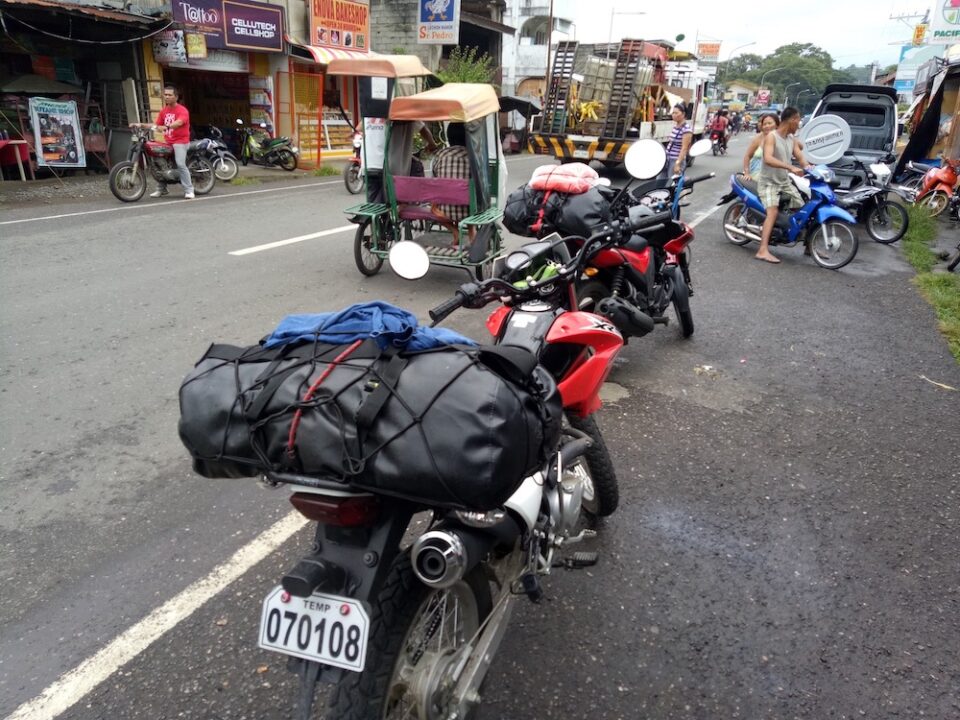 Sipalay itself is laid out on the edge of a brown beach which is nice to swim at. But the real beauty is a little south of town at Punta Ballo.
There are a few nice hotels and resorts here as well. Likewise a bit north of Sipalay you’ll find the golden brown Sugar beach with a few hotels as well. I’ve stayed here on other trips, but you can’t get there with vehicles, so that’s a bit of a hassle on a motorcycle trip. 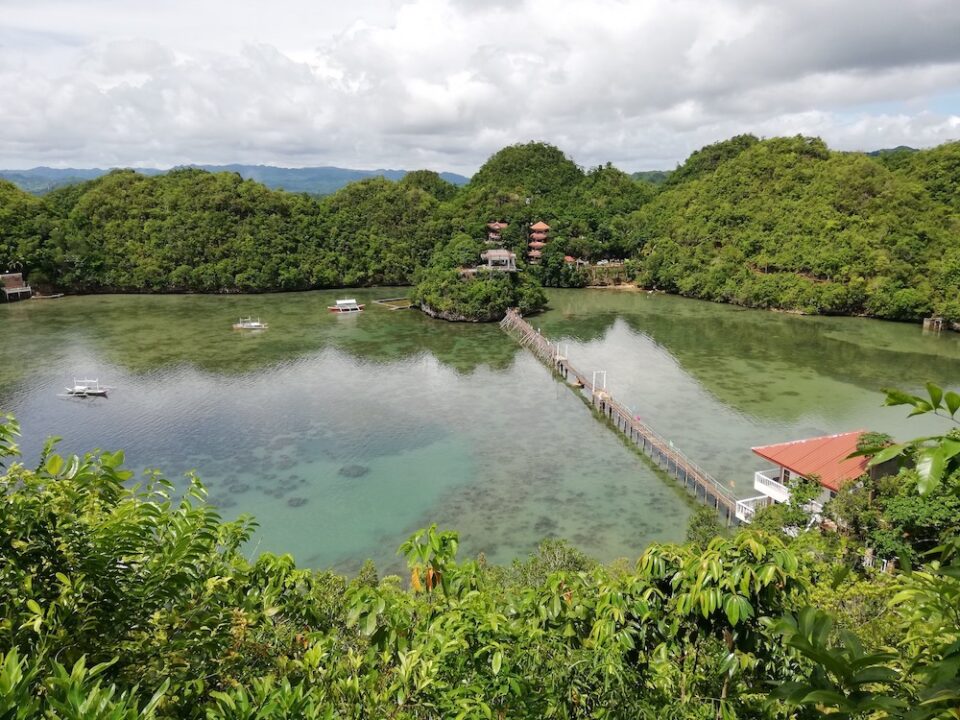 Having spent a few days in Sipalay we headed north through Kabankalan City and heading north to arrive in Bacolod city. This is the capital of the northern part of Negros Island. This is a larger city with several shopping malls and a large city center.
We stayed here a few days to visit the modern SM City Mall, which has lots of nice restaurants.

From Bacolod we took the ferry to Iloilo City on Panay Island.

Crossing the philippine sea between Negros and Panay is easily done and takes only an hour or two with the right boat. We like to us Fastcat.
In Iloilo City we were unceremoniously ushered of the boat. The ramp literally stands next to the road so we made for a quick getaway to our hotel and on to explore the city. 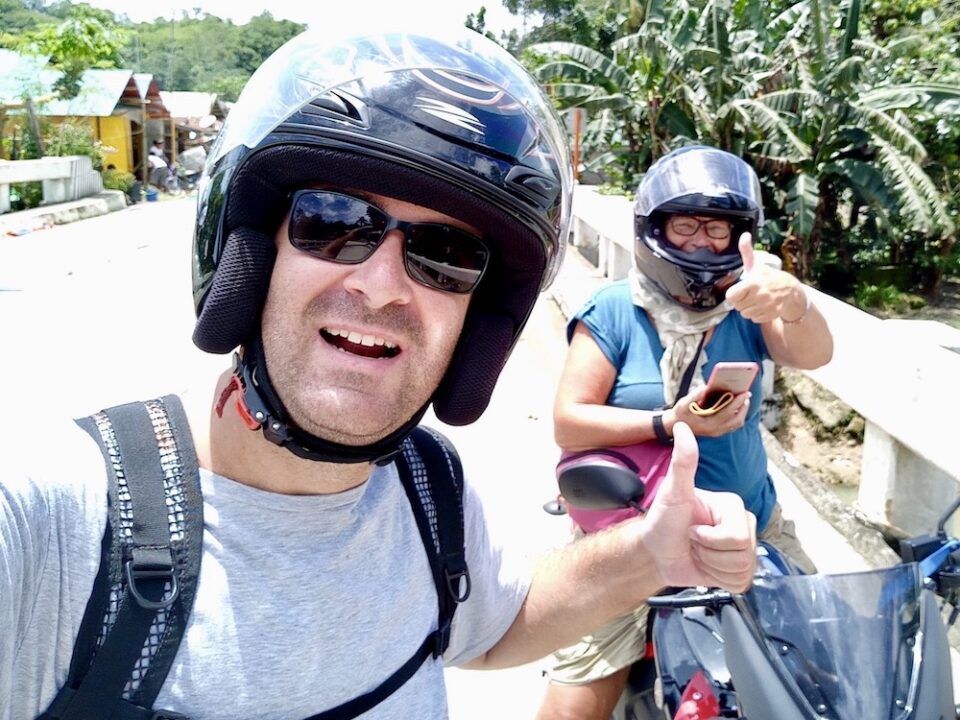 Similar to Bacolod, Iloilo City is a larger city with several nice shopping malls and a large city center. Iloilo City is a nice city overall, the large and old city center is fun to explore for an afternoon. Watch out for pickpockets though.
Equally fun are the larger malls which have many nice places to eat at.

Nearby is the town of Molo which has a nice central square or park kind of setup. It has a really friendly and unhurried atmosphere which we really like. We’ve spend a few afternoons here just sitting around in small eateries with drinks and eating snacks.
Also here you’ll find the famous Molo Church and an old villa style house from the colonial period. Both of which are usually open to the public. 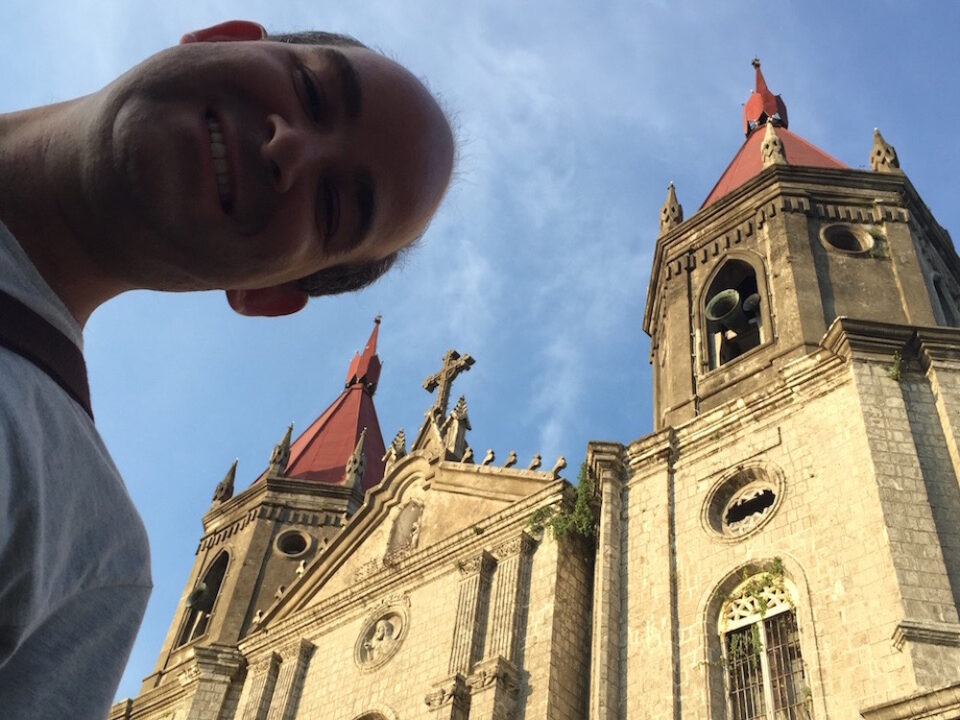 Also popular, with the locals at-least, is the town of Jaro, another part of Iloilo City. Which also has a famous cathedral to visit. On the square in front of it you’ll often find markets, too.

From Iloilo City we headed west riding along the coast with the goal to cross the islands boxy shape to arrive at Aklan. Orignally I planned for a overnight stay in San Jose. It was a really nice day and the road wasn’t too busy so we arrived in San Jose way too early.We had some lunch there and headed north towards the town of Aklan. This part of the ride was just as nice and the roads unusually quiet we made good time. Just before Aklan is the tiny town of Pandan where we stayed the night. There aren’t much accommodations available here, but we found some basic lodge kind of place. 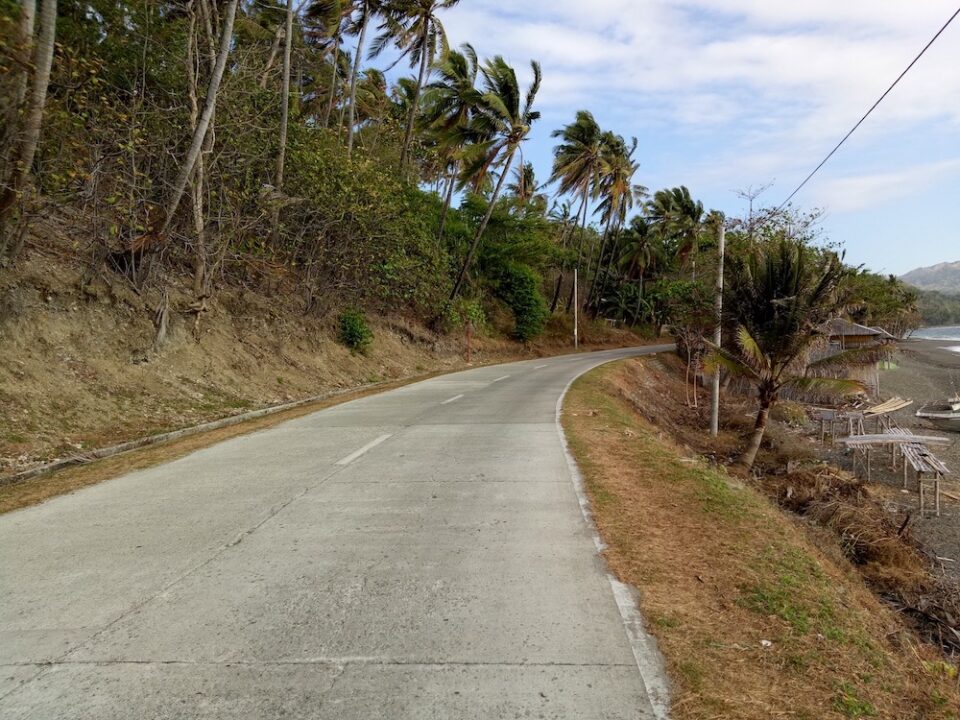 The next day we would move on to Aklan and take the boat to Mindoro Island.

Heading the final few kilometers up to Aklan we spotted the boat about ready to leave. Checking with the port authorities they said it would leave in about 30 minutes and that if we hurried we could still be on it. Lucky.
There are several shipping companies going between Panay and Mindoro. I think we went with Montenegro this time. If given the chance I prefer Starlite and Fastcat though. 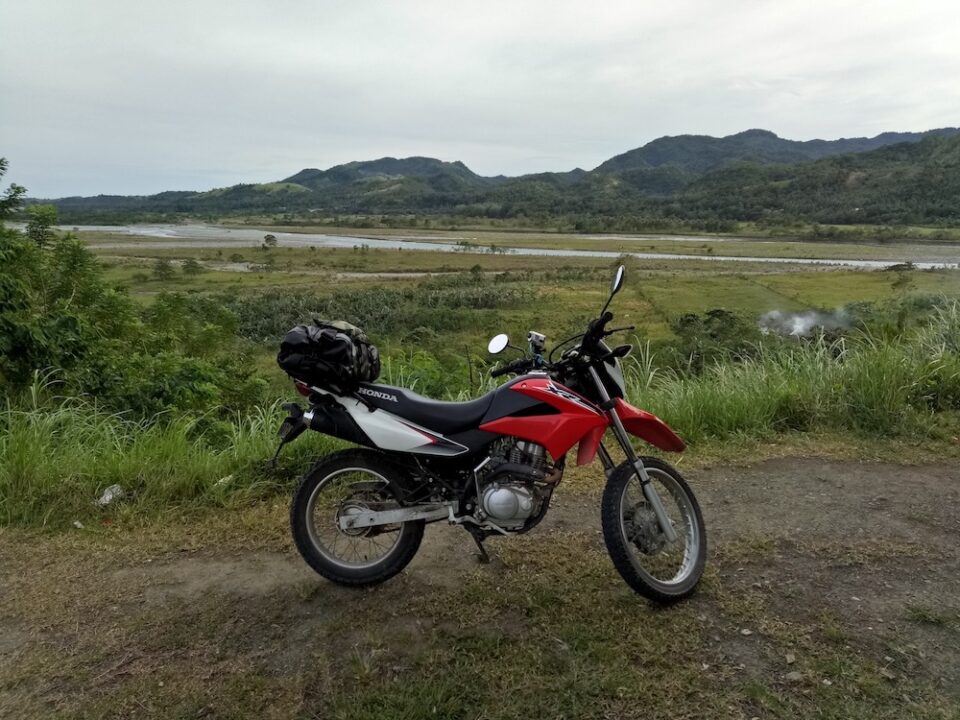 The journey across takes a few hours. On the Mindoro side we decided we could still make it to Puerto Galera and hopefully arrive before dark.
The ride to Puerto Galera was fun and at times challenging as traffic on some parts was a bit of a hassle. But we made it. Taking plenty of breaks and enjoying the many nice views from the higher parts of the roads over the countless valleys and of-course the sea when we could see it.

Puerto Galera in a touristic hotspot. Many people from all over the world go here for diving. People come down from Manila for the weekend or even have a second home here. There are tons of hotels in every price range and even a number of appartment blocks where you can rent a place for a few weeks or months. 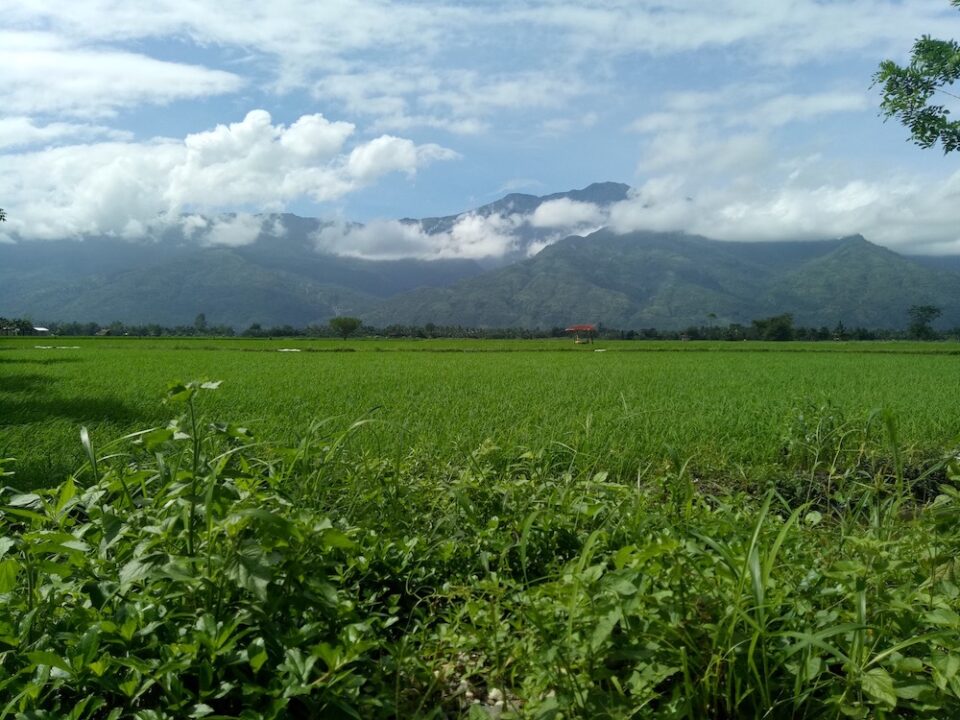 Other than beaches, nightlife, diving and touristic fun the Puerto Galera area has not much to offer in terms of development. Internet is kind of spotty. The power fails from time to time and there is little to no shops or even banks available.
But, to stay here for a few months none of that really matters. In Puerto Galera itself there are a few decent supermarkets. The nearby San Isidro, dubbed White Beach, has the… White beaches with lots of restaurants to enjoy. And if you like to go Diving or jump into nightclubs you can head over to Sabang, another nearby town. The 3 towns are together known as Puerto Galera or simply White Beach. 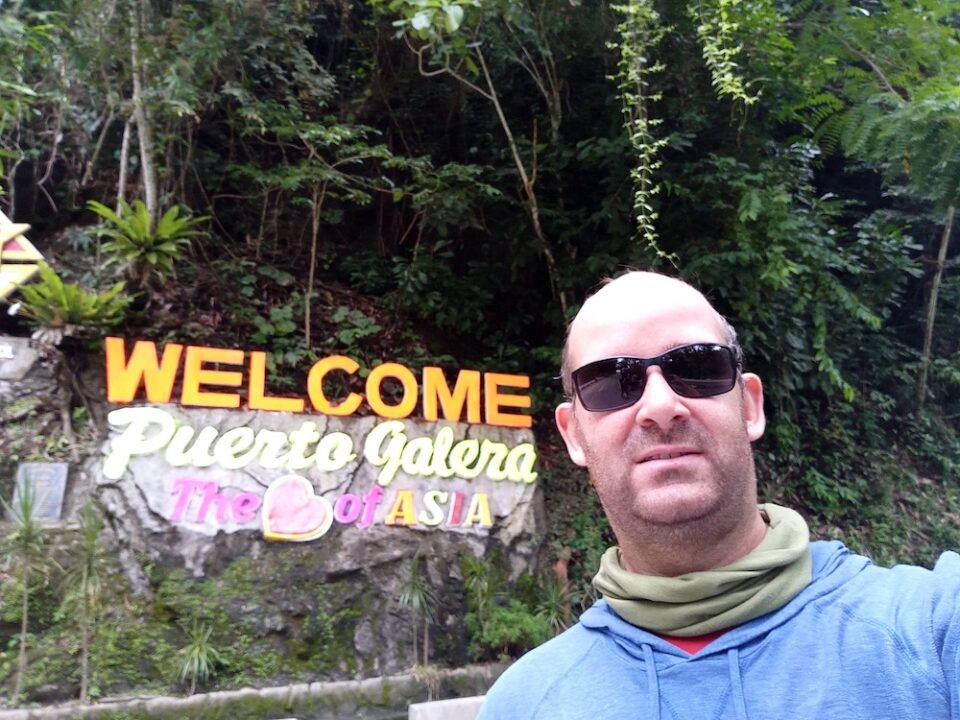 We rented 2 apartments in White Beach itself because we really like to be near the beach. And we found a place just a 100 meters or so from the beach. Just far enough to not hear the bar culture and live shows that go on till late. But close enough you can easily walk there every day for lunch and more.

It’s almost like paradise.
We stayed here about 6 months. Jeanette for her 2nd and me for my 3rd time. And it was great fun. 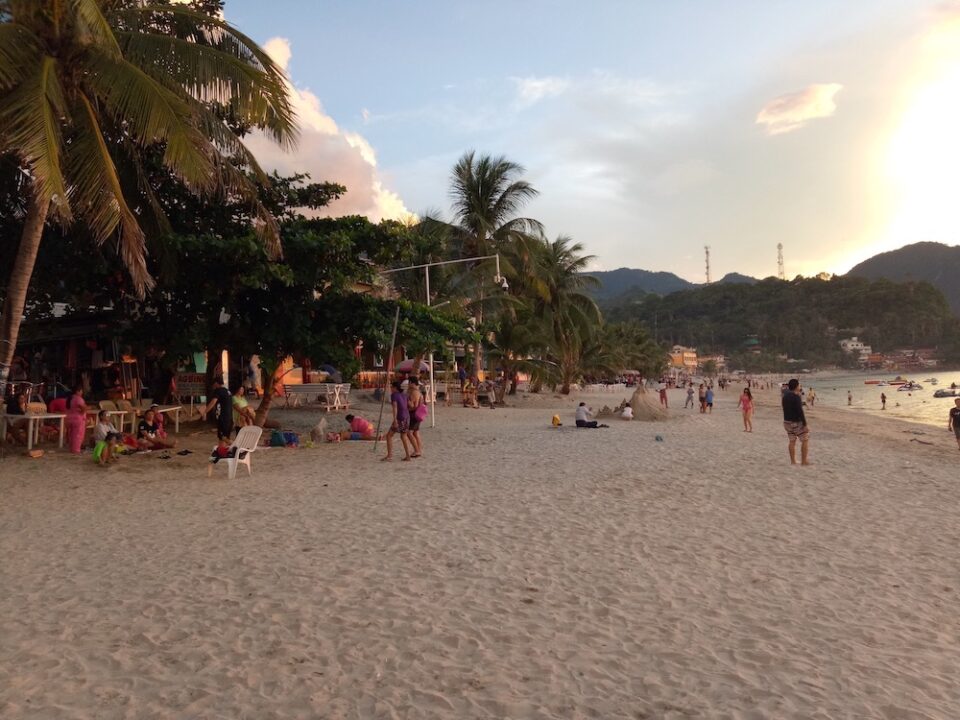 Our journey didn’t start or end in manila, but I imagine a number of people interested in making this or a similar round-trip will start and end in manila, this short paragraph exists. To get back to manila you’ll head to Calapan first, from there you can take one of several ferries to Batangas. If available I always prefer Fastcat and Starlite ferries.

Here you’ll have several options to get to manila:
You can use the STAR highway, which is a toll road straight to manila. This starts at the northern boundary of Batangas city.
Alternatively you can ride west towards Lemery then north to Tagaytay/Dasmarinas over smaller roads to avoid the tolls.
Or head north past Batangas and follow the regular highway north to Lipa City and then head to Manila from there. Which is toll free as well.

Check out part one of the adventure where we head east and south from Tagaytay to Dumaguete.

You can download all routes and tracks here on MotoTravel. All routes include a Points of Interest file with recommended places we visited and liked.