On our way to La Paz in Baja California Sur we’ve spent a few days in San Cristobal de las Casas in Chiapas Mexico. This city was high on our list of places to visit for its historical city center. And historical it was. Most of the older buildings have been preserved and repurposed for modern things like restaurants, shops and coffee shops. Some are turned into museums.

First, let’s start with the less attractive things in the city. Most of the touristy things are either closed off, walled off or only open on specific days. All of which poorly advertised. For example the main cathedral and adjoining gardens/grounds are walled off for maintenance or something. The whole cathedral is off limits for tourism. You can barely see the building because of the construction-site-wall surrounding it. Which makes taking pictures a near impossible task.

Next to that, with the current feminist protests going on in the country most walls, flat surfaces and and especially religious or government buildings or construction walls are ruined by feminist propaganda graffiti. The city is littered with angry cries for justice, equality and the destruction of men and their ways. Which makes the city and especially the bits tourists want to see an ugly sight. In general it’s not all bad, but you know, it’s on every street corner.

The good thing is that a number of other tourist attractions are open. Like the chapels ‘Iglesia de San Cristobalito’ and the ‘Guadalupe Church’ on top of their hills at either end of the city center. If you can ignore the graffiti they’re nice to visit. But, in contrast to the more downtown churches these are not as pretty or significant. 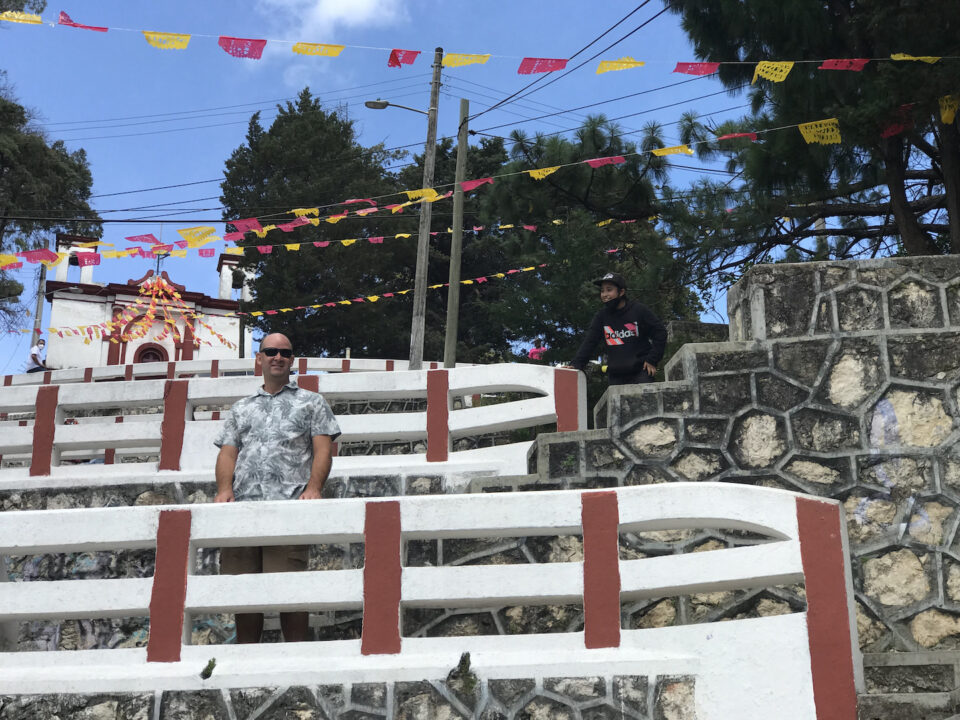 Most of the squares are accessible and on some there are all kinds of things to do and see. Also in the evenings. On Plaza La Paz there is a evening market where you can buy local clothes – Ponchos and embroidered shirts and things like that. The surrounding area is rife with shops, restaurants and some bars.
Which is great. After visiting Villahermosa it was nice to have a decent choice of restaurants again. We didn’t eat fast food all week!

Overall, San Cristobal de las Casas is a nice town to visit for a few days if you like the historical look and such. Wander the streets. See the squares and hopefully be able to see the old churches and buildings or even be able to enter some of them.

We visited the Amber museum next to the Plaza de Merced. Which has a nice exhibit of amber jewelry, some history on why amber is significant for the region and more of such fun things. And a few streets away from it is the Jade museum, which is also an important material for the area. 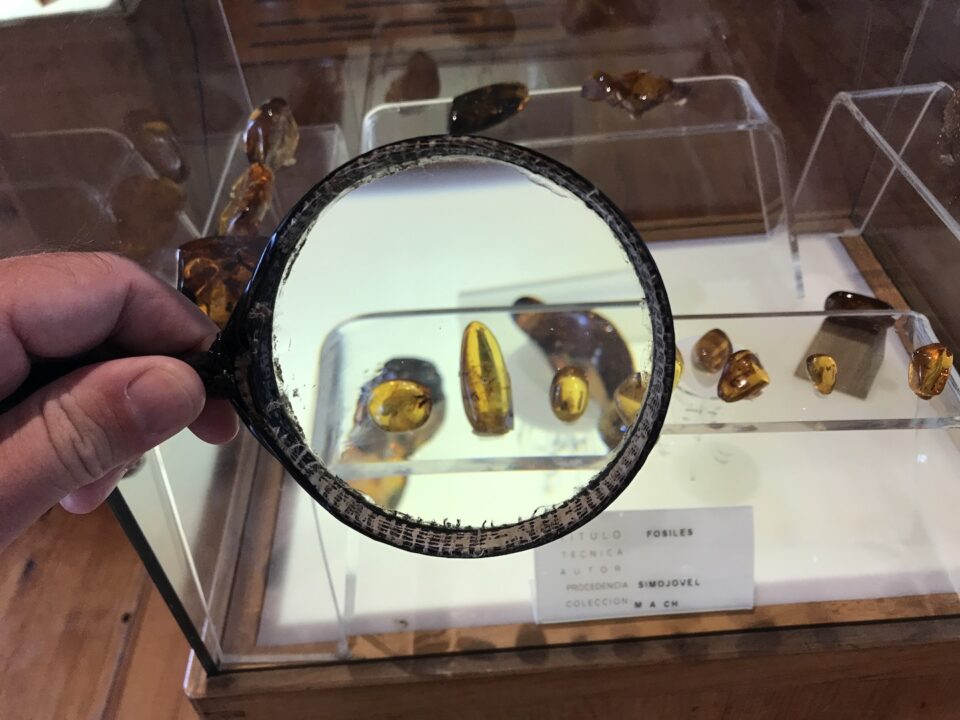 If you look closely you’ll see where Jurassic Park got inspired by. These amber pebbles are full of ants… hah!

Seeing the city is nice and all, but we also spent a day driving through the mountains. Just to explore a bit. I’d created a route of about 120 kilometers long passing through numerous small towns and consisting of endless hillclimbs and twisting roads. I was especially keen to visit a river that sliced through a rocky bit of mountains. And this turned out to be a very nice area to visit. Jeanette and I really enjoyed visiting the Arcotete Eco Park that runs it. They organized things a bit with some simple restaurants, a shop for drinks and set up areas where you can go and barbecue and picnic along the river or up the hill. I guess it’s a big attraction for the locals to hang out on weekends and special days. 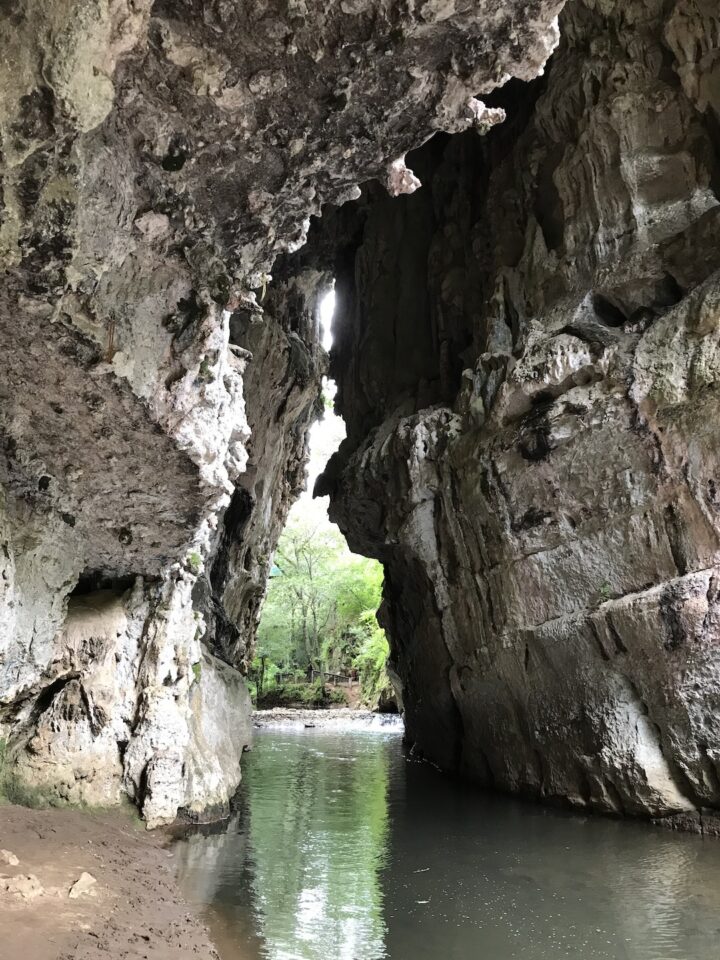 I was there mainly for the river-through-the-mountain thing but quickly discovered you can also go into a cave system, which was a nice bonus. They’d mapped out about 400 meters of narrow caves leading to some semi-open caverns full of stalagmites and stalagtites. The cave pathways were fun to explore and figure out. 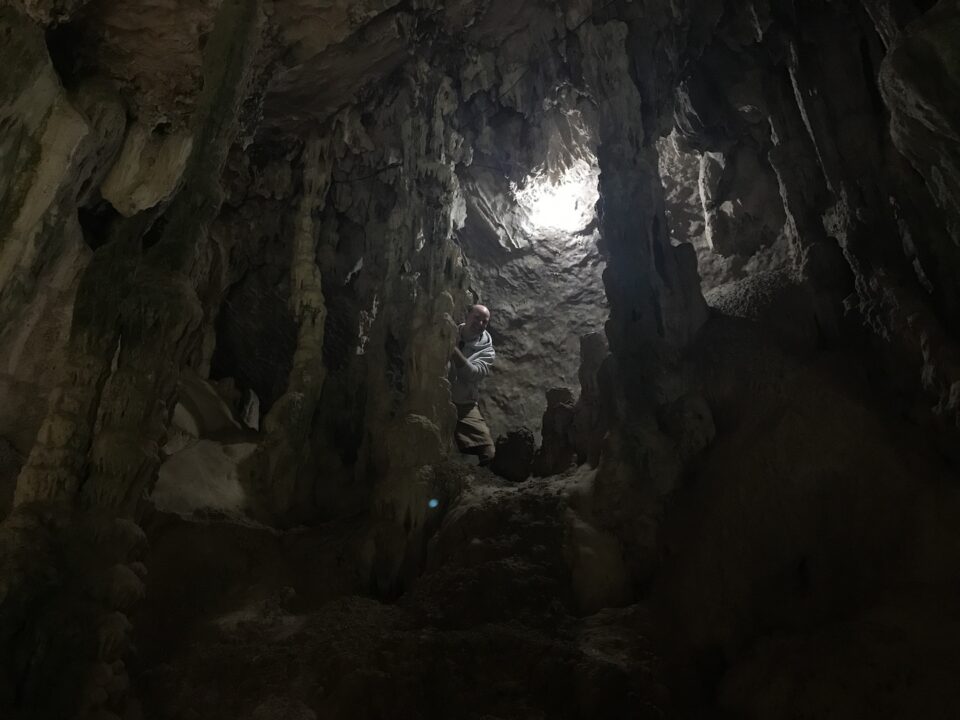 Along the way we stopped for this view (below) and a curious guy came out for a little chat. 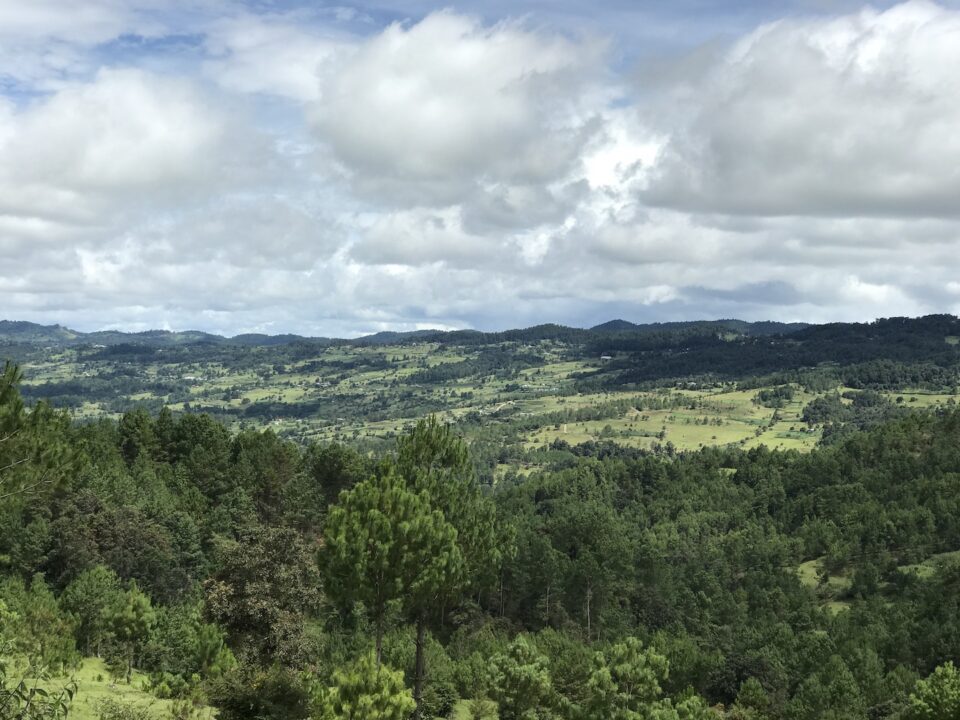 In my broken Spanish we had a chat about what a nice view he has from his house. And I asked him if he ever saw a foreigner on his road. Or in the area. He was sure no foreigner ever visited the area. After telling him where we are from and where we’re going we shook hands on the understanding that we were the first ever foreigners to ride through his village. I think…

The following days we spent loitering around town, enjoying some of the cafe’s had many drinks and ice-creams and just relaxed a bit while exploring various parts of town.
Jeanette tried to buy some thingy from a kid, but he didn’t seem all that happy with the sale. 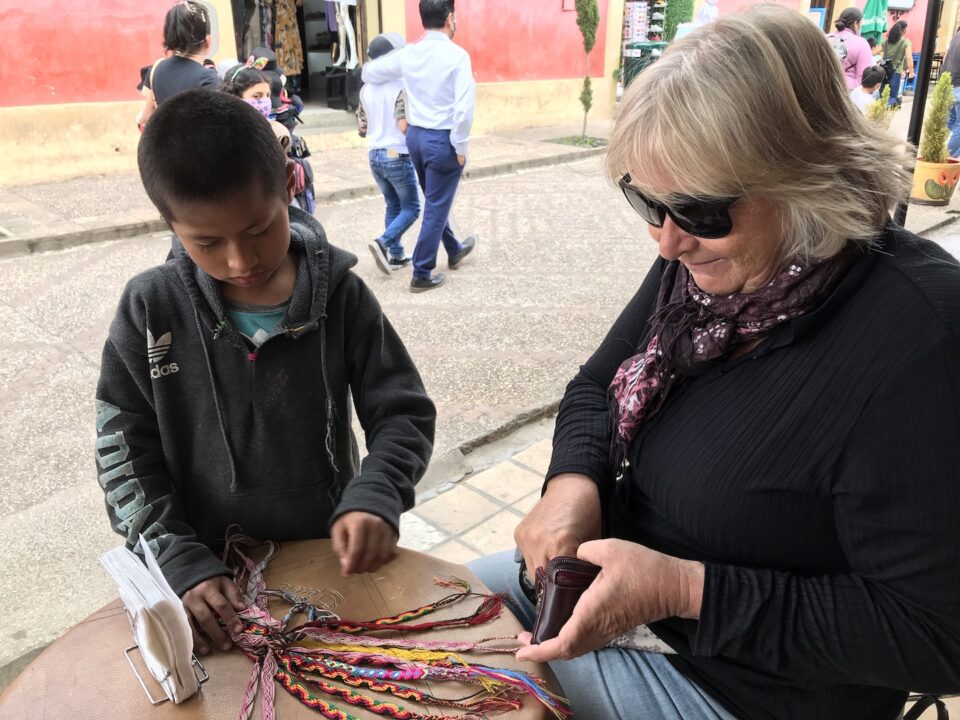 We also dared to climb the hill to the Guadelupe Church. At 2200 meters and rising that wasn’t an easy feat. And we had to stop to catch our breath a few times. We’re so fit…
Altitude sickness shouldn’t kick in until 2500 meters and up. But pfft. This was a rough day hah. We’d already been short of breath for a few days since the whole city is at around 2100-2200 meters altitude. This also means the area in general is pretty cold compared to the lower parts of Mexico. 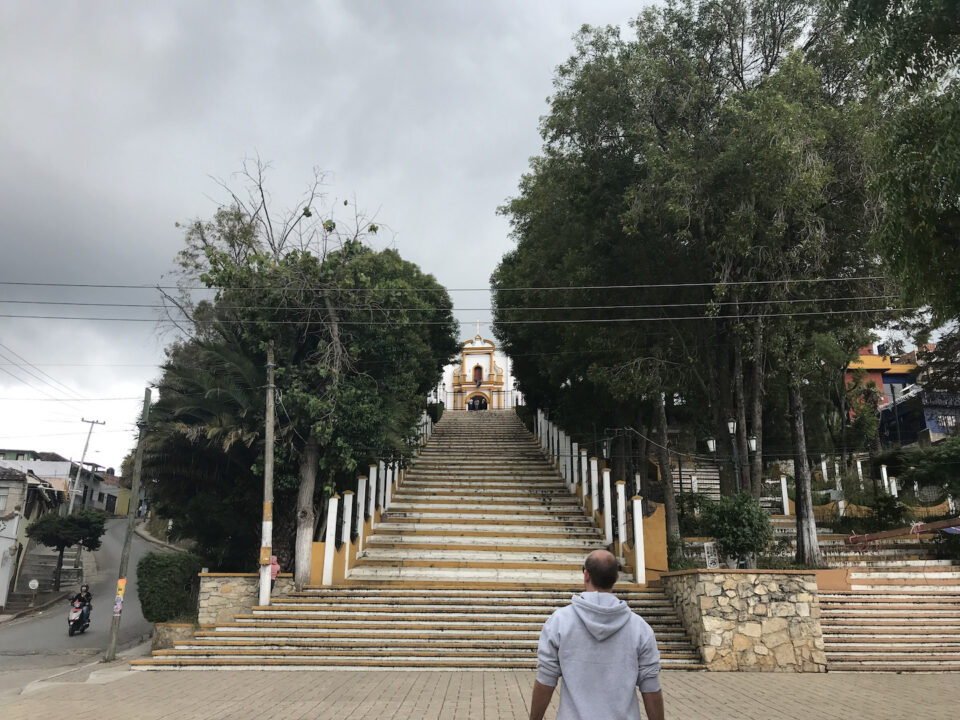 Did we enjoy our time in San Cristobal de las Casas? Or Jovel as the locals call it. Yes! Do we recommend it for others to visit? Sure. It’s a nice little city. And if you’re into historical city centers and like walking around in places like that. Yea, it’s worth it to stay a few days and explore. We stayed in Hotel D’Monica, which is right in the middle of town.
We’re happy we made the detour to visit this fun city. But the lack of availability on significant landmarks was a big bummer.

We’ve now moved on to the nearby Tuxtla Gutierrez for a few days and soon will ride on to Salina Cruz in Oaxaca. Which will be our first time near an ocean in many weeks. So prepare for beach photos.