We, Arnan and Jeanette, are going to drive on motorcycles in Mexico from Cancun, Quintana Roo to La Paz in Baja California Sur. Our route getting there is well over 5000 kilometers long. And the idea is to spend about 3 months on it and seeing a lot of Mexico along the way. Simple, right? Yup… Adventure!

The difficult part is getting there in one piece while having fun. And I believe that gets exponentially easier if you have a bit of a plan.
I’ve made a route, tons of things to see and do along the way and have a general idea of which hotels we can use. And, well, adventure!!

I’ve been planning for this journey on and off for the last 2 years. It took way longer than expected courtesy of the Chinese Flu (F*ck you China) and how slow the local government works here if you don’t pay ‘extra’. Fortunately the Irrational Flu seems to be under control. The government is lifting many restrictions and that means it’s time to hit ‘PLAY’ on our lives again. Woohoo!

Over the past few months things got more serious and more clear and planning began in earnest. The enormity of the trip hadn’t quite set in by looking at the map and fantasizing I’d be riding this or that road soon(ish). The reality struck when I began to plot a route across the country and saw the route file I was making start to stutter and become sluggish from all the waypoints, route plotting and attractions along the way. 5500 Kilometers… What?!?

To fix that, I first cut the route in 2 files, then 3… 4… Then finally decided that a set of sections, a smaller route between each city, was the way to go. Which meant A LOT of route files. Why are there a lot you might ask… Well, we’re not taking the Quota (toll roads). We like to actually see Mexico and not race along arrow straight roads and sound walls from fuel station to fuel station. 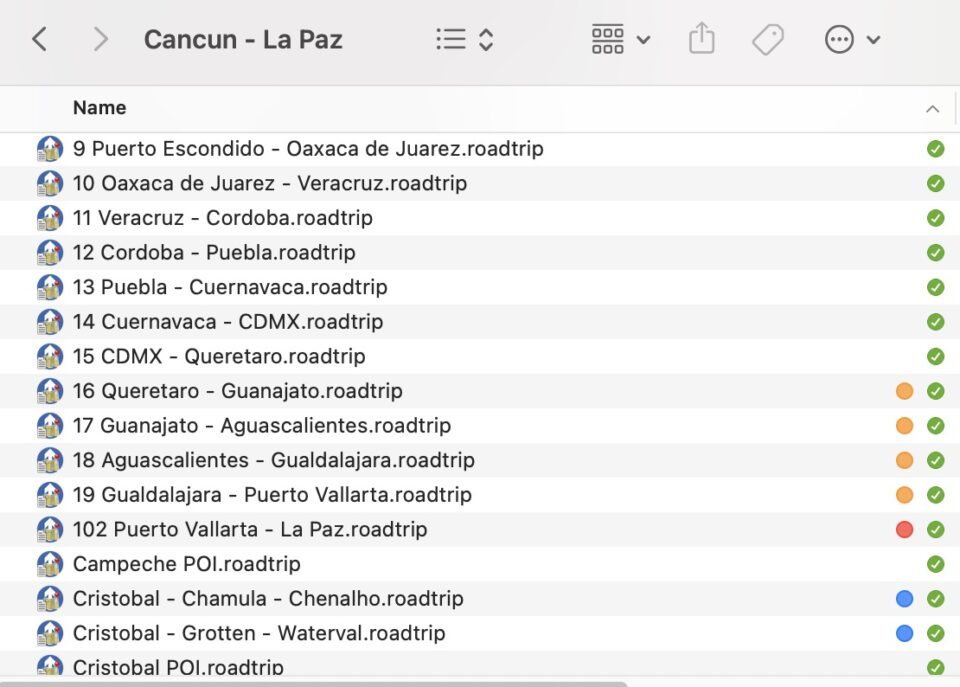 Yes, that’s perhaps a bit more scary and nerve-wracking than zipping along on the safe and secure tollroads where there still is crime, chaos and accidents but this way we get to see the true Mexico and visit dozens, if not hundreds, of towns, villages, twisty roads and exciting attractions along the way. Like an actual adventure!

Meanwhile actual preparations are to be made as well. Getting gear, considering luggage options. Some new clothes and shoes. Sorting out gadgets. That sort of thing. Also we felt it was smart to try out the motorcycles and some of the gear by going on a few shorter trips to make sure we got the right stuff and knew how it works.
Because once we are on the road, amazon deliveries isn’t really an option anymore and getting items locally seems to be a hassle to say the least. We’ve been to most motorcycle shops in the Yucatan area and other than 2 or 3 decent stores pretty much nobody sells anything useful for motorcycles other than cheap import knock-off crap, and even those 2 or 3 better stores barely have anything – But at-least they tried to make an effort.

Anyway, after some months of weighing options and tinkering and a lot of waiting on overseas deliveries, we have our bikes set up pretty much the way we want now.
Aside from a phone and camera mount we opted to both get a luggage rack that’s specific to our motorcycles. I went with the Givi PLR5127 pannier racks and Trekker Dolomiti cases for my BMW F850GSA. Which I think looks really cool and solid. 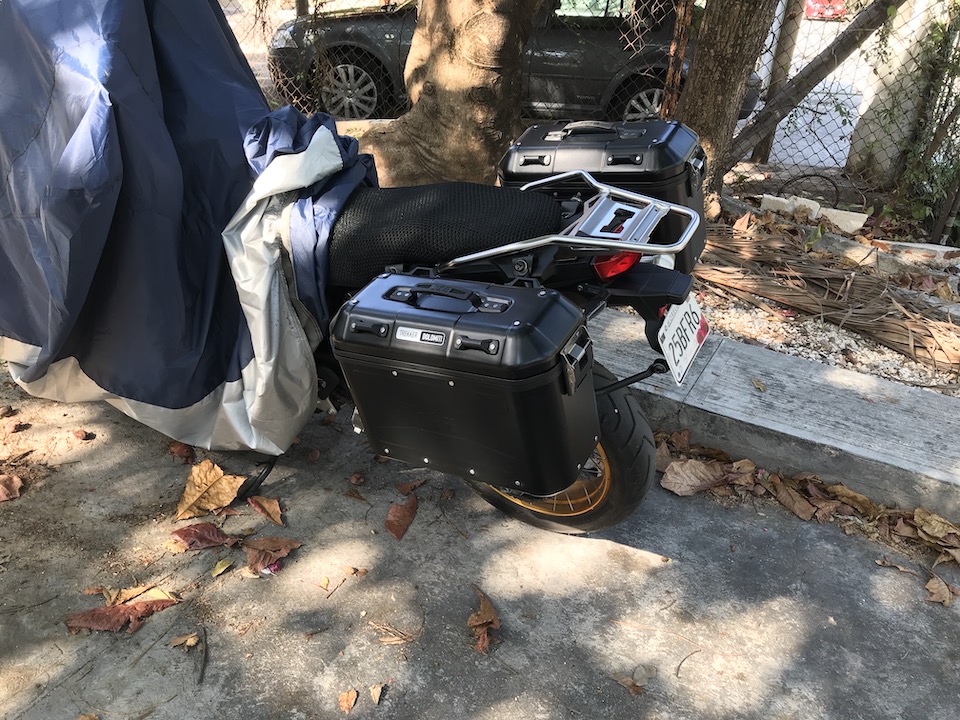 Jeanette on the other hand opted for a more discrete option for her BMW G310GS and put on SW-Motech SLC carriers with DrySpec D40 panniers. These are water proof roll-bags which look excellent on her bike. They don’t really belong together, but it’s a neat combination to keep the panniers from flopping into the wheel or exhaust. 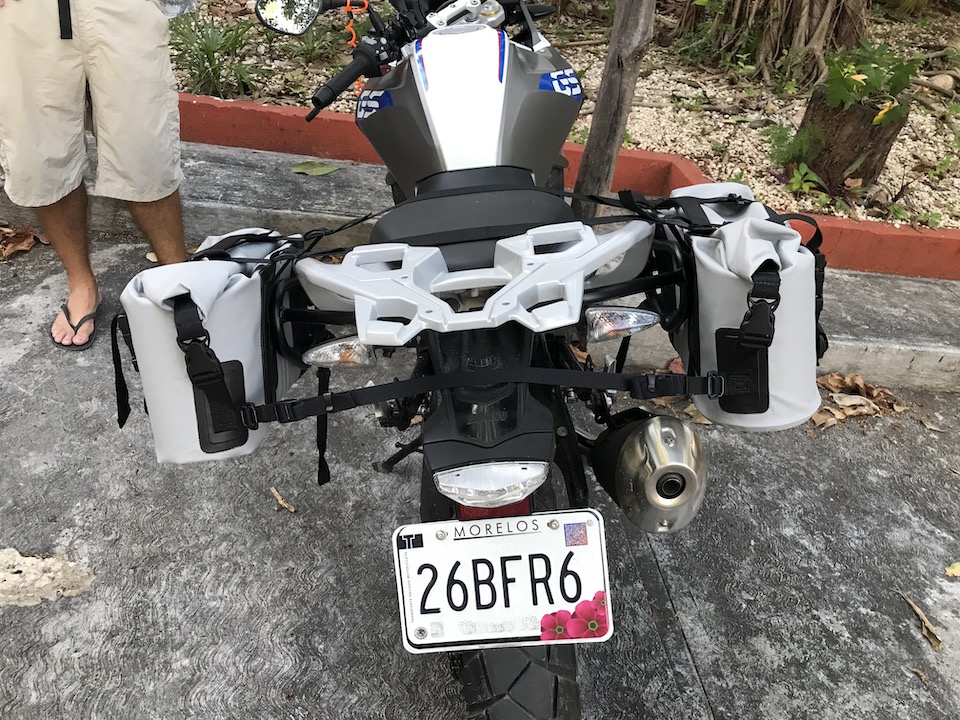 Figuring out the straps for it was an adventure in itself, but I think she’s got it covered and has a solid luggage option for the trip.
We both have a DrySpec D38 roll-bag to put on top to complete the package. As I mentioned we went on some shorter trips and so far the luggage choice seems sound!

With luggage sorted out I also spent a lot of time on our navigation options. The logical thing to do was to buy a Garmin GPS. So we got a Gpsmap64 only to find out that Garmin devices are terrible at routing. Who would’ve thought… The specific model we had, even though it supports vehicle navigation, wouldn’t navigate vehicles and was generally a pain in the ass to use. Garmins Basecamp is an acquired taste, to put it mildly… And it didn’t work for us with poorly made maps and utterly dreadful everything.
Needless to say, after a few frustrating days we decided our adventure wouldn’t benefit from this aggravation and we quickly got rid of the Garmin.

We’ve now opted, after some trial and error with apps, to use OsmAnd. OsmAnd is kinda nice and does pretty much what we need for navigation – A line to follow on a map while showing Points of Interest. Simple really.
Jeanette uses the free maps. I bought the monthly update package and some of the plugins so I can record trips and see mountains easier. It’s cool and we like it.

And now after months of planning, we leave tomorrow!