Last week we stopped by in Campeche for a few days. Or more specifically, the historic city center. We ended up mostly ignoring the newer parts of the city other than a stroll through the commercial bit where the market and shops are. The Spanish sort of built this place up quite a bit and most of the old streets and buildings are still there. With shops and restaurants all over the place.

Overall Campeche doesn’t have all that much to offer, but if you like wandering between the old buildings from hundreds of years ago it’s pretty cool. Most of the old city is surrounded by a city wall with fortifications everywhere. A few Kilometers east and west of the city are some preserved old fortresses as well. I think 6 in total. We visited Fuerte de San Miguel and it’s coastal defense site. I was hoping to get a great view of the city and Gulf of Mexico. But the surrounding area was littered with large trees. So no such luck – Nothing to see. The fortress itself has been filled with Mayan artifacts and history tidbits, which was ok, but I was hoping for more Spanish stuff. 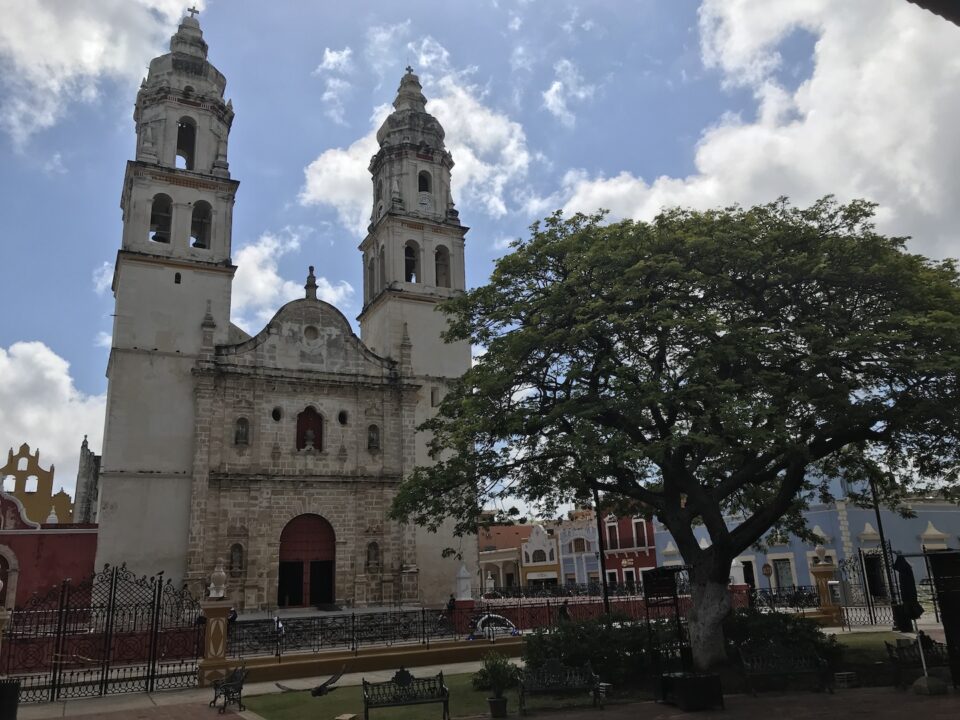 Of-course, as with all these old Spanish colonial things there is the main plaza, or park, with an old church. The whole setup has a laidback atmosphere and has some shops around it. As well as a few museums covering the Spanish era. We visited the Centro Cultural de Casa 6. Which is a restored townhouse set up as a mini-museum with a few rooms and an inner area filled with furniture and old-fashioned items. Quite nice. 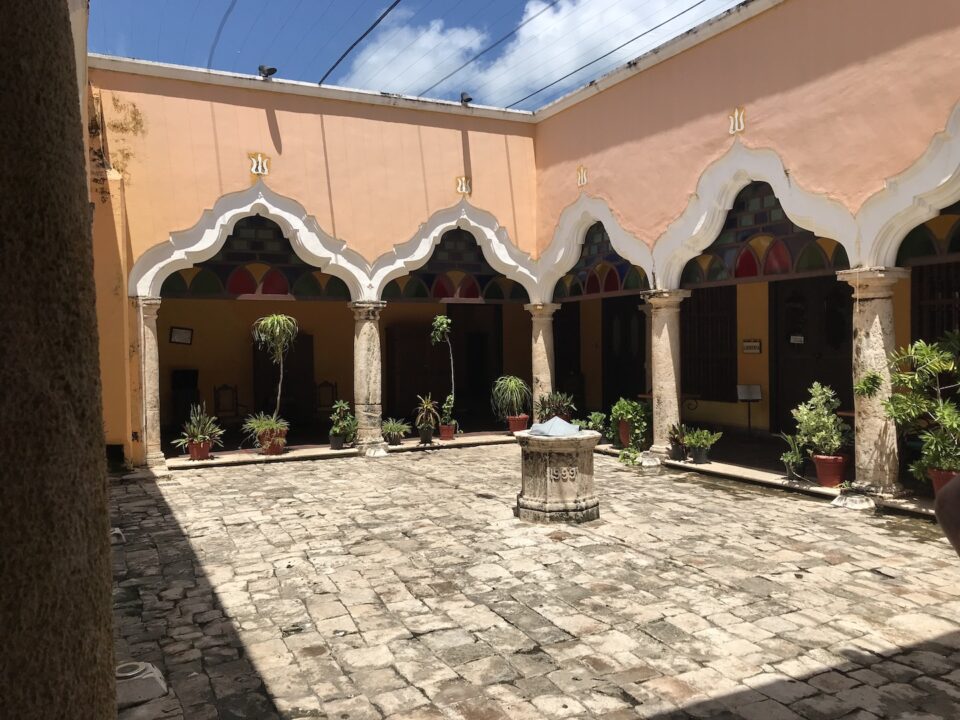 The whole historic city center is made up of lots of narrow streets with colorful buildings everywhere. It’s nice to look around while finding your way to the various attractions. Several parts of the old city wall are open to visitors as mini-museums as well and spread out over the area are some churches, restored buildings and other structures to gawk at. Standing on top of the city wall gives you a good sense of the place as the wall overlooks the lower buildings. 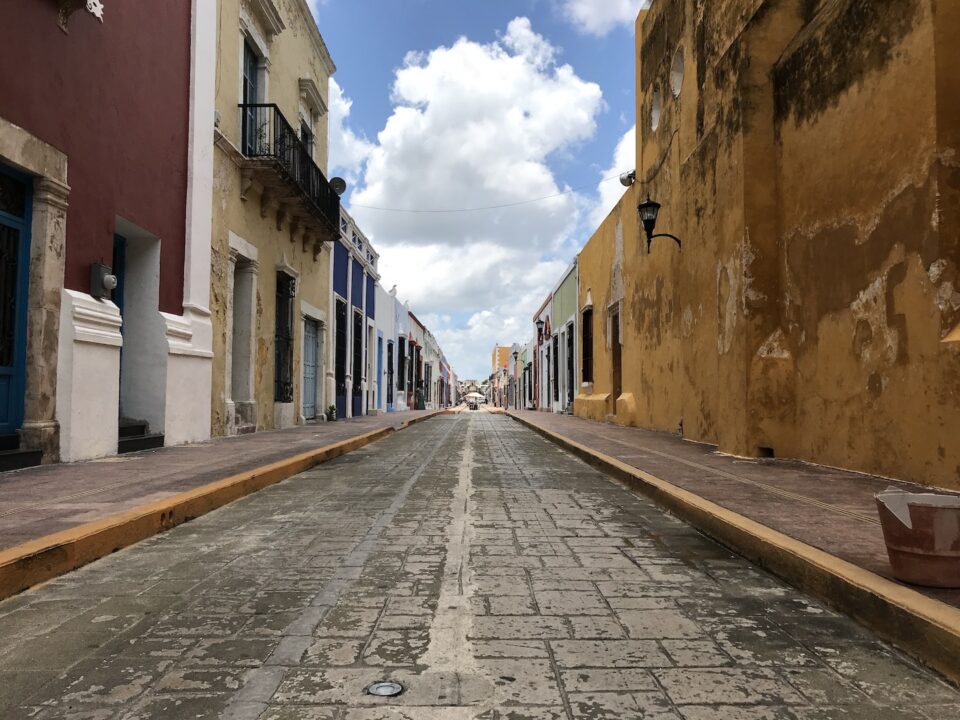 Just outside the old city there is a Malecon or boardwalk/sea wall. Which functions as a big attraction to the city for all kinds of statues, monuments of whatever the city finds important or inspirational. But of-course also the colorful city letters. I thought the Malecon in Campeche was quite long, several kilometers at least. And I walked most of it to find the San Miguel Fortress outside the city. 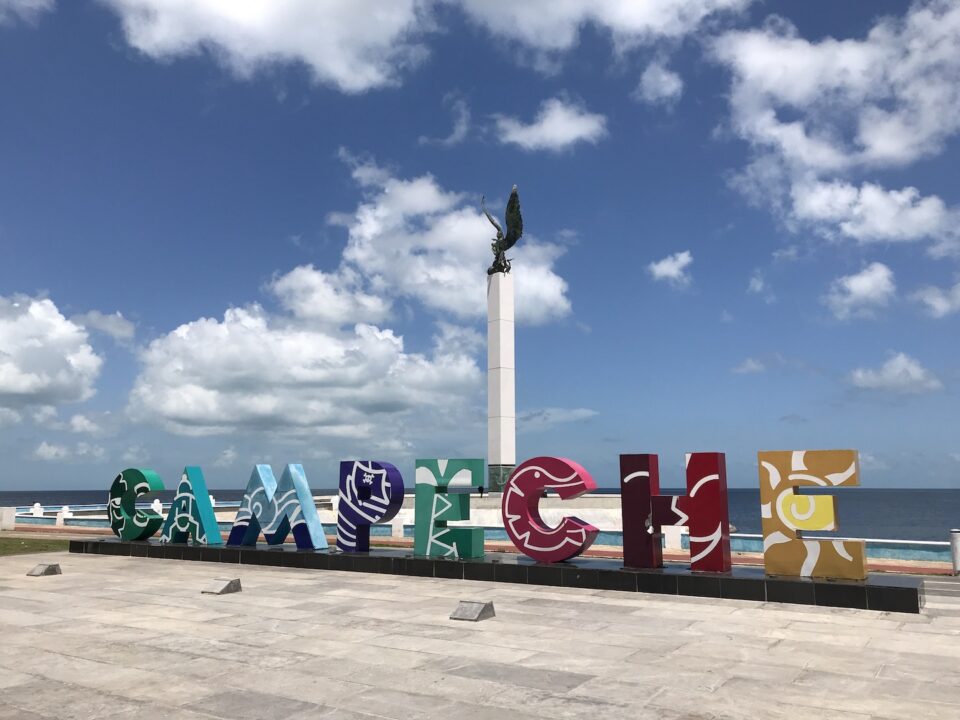 One section was used by the local fishermen with dozens if not hundreds of small boats littering the concrete seawall. I say littering because every boat was in some form of disrepair or need of maintenance. Most of which filled with pelicans who used them for sunbathing. 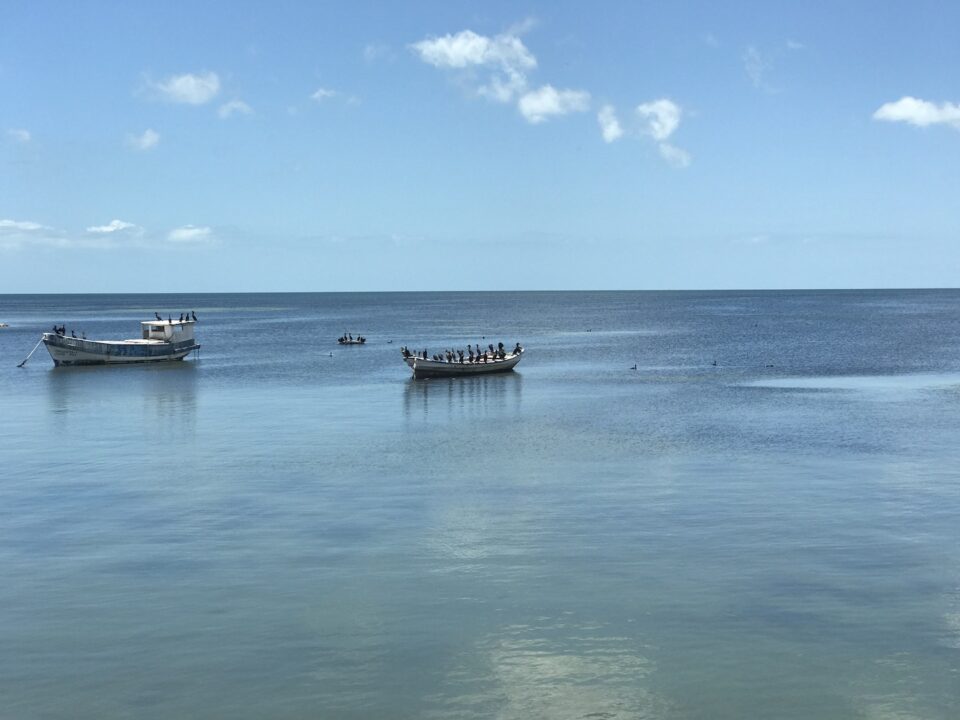 A bunch of the more important and noteworthy buildings are lit up at night. On a particular dark evening the church looked quite eerie, bathed in white light. I’m not sure if I liked the look of it. In most towns I’ve been in they used colored lights for this kind of thing. But oh well… 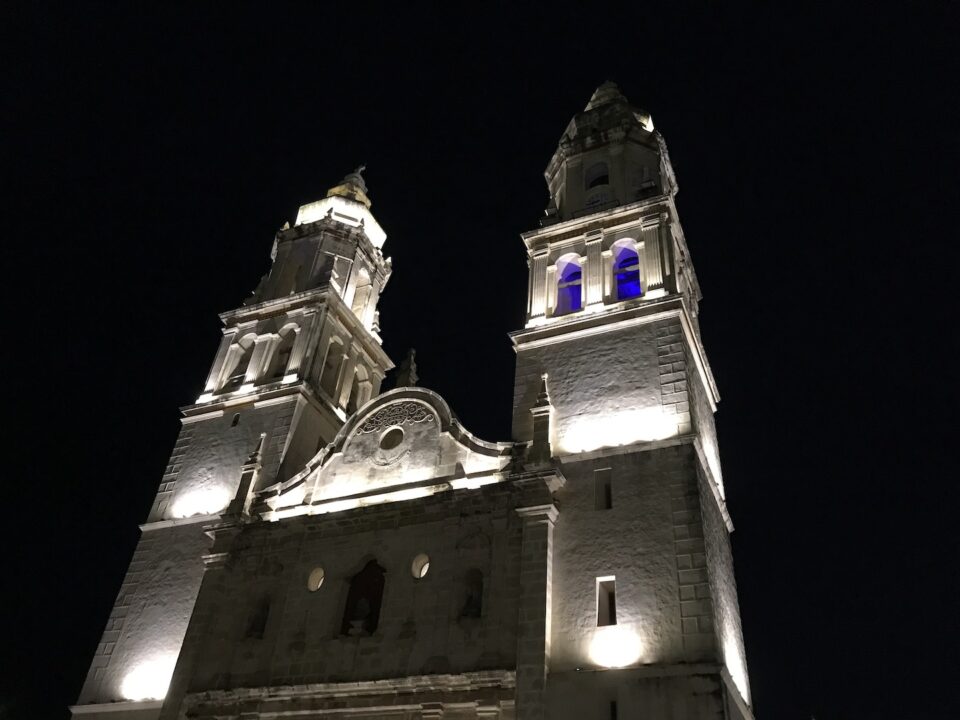 Our next stop was Isla Aguada. I’m sitting in my hotel bed there now. Writing this article. On the map Isla Aguada looked like a sleepy beach town. Which is kind of is. But once we arrived here it turned out to be more of a dusty truck stop kind of thing where a few thousand people happen to live. 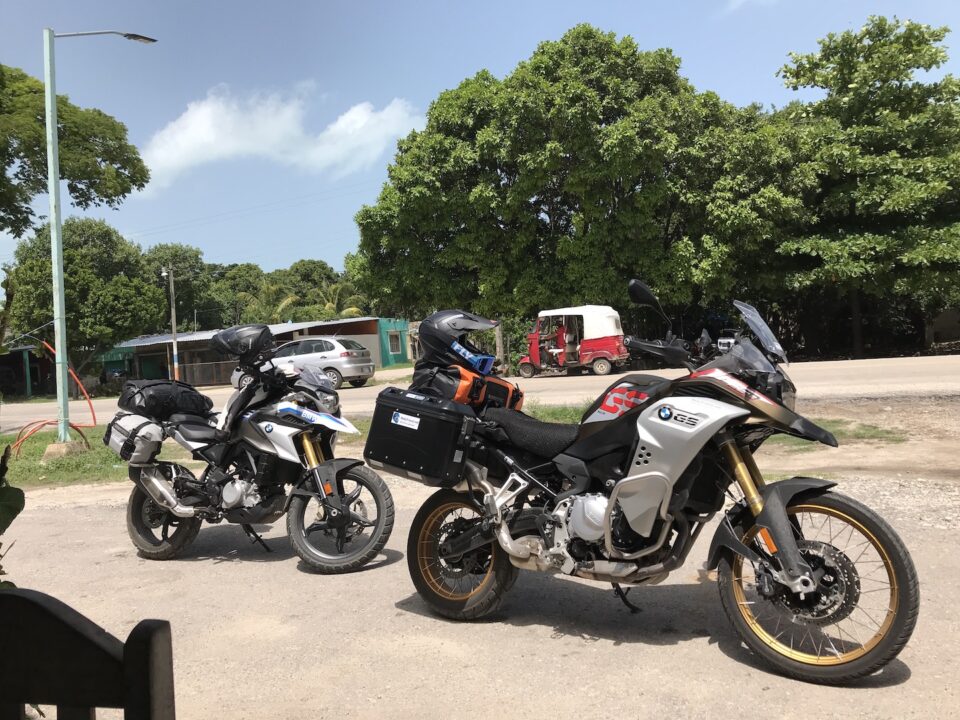 The ride to Isla Aguada was quite nice. Some easy highway and coastal roads. We also had our first ‘proper’ twisting roads. Which after Quintana Roo’s straight boring roads were actually a bit of a challenge to handle. But it was good practise for what comes in a few weeks…

I did some laundry, and so far we’ve explored town a bit. Which isn’t much. A lot of the side roads aren’t even paved… But the Wifi is good and we found some simple restaurants to try out tomorrow. 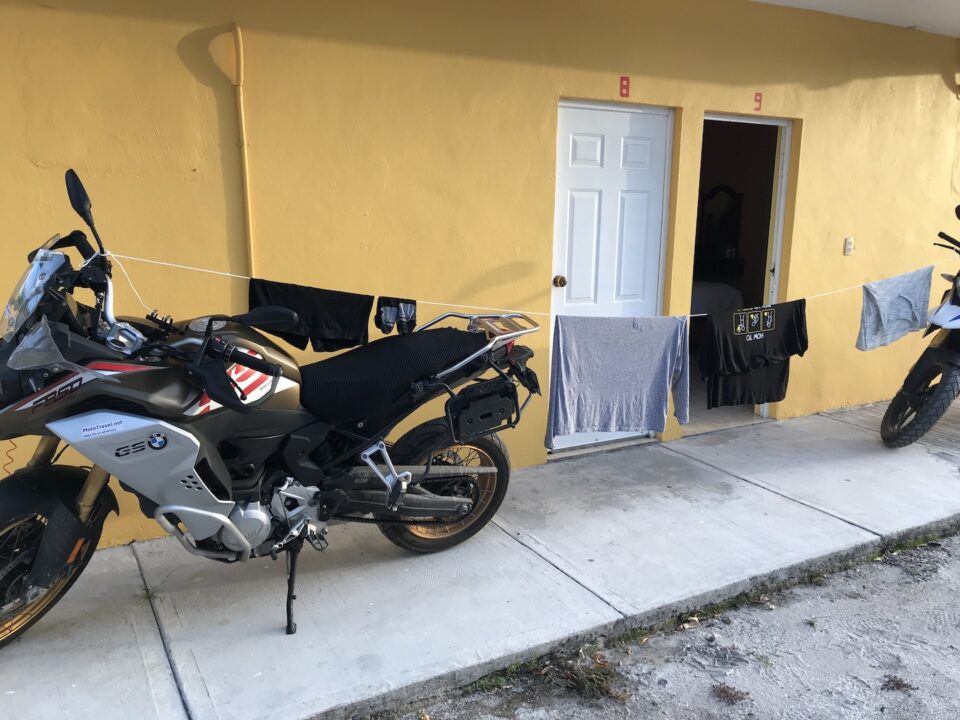 Oh and a Iguana stole my nachos…