Points of Interest (POI for short) are locations marked on the map that are noteworthy. This can be anything you like – such as a fuel station, a scenic viewpoint, a restaurant, toll booths or a police checkpoint. Points of Interest are easy to use and generally easy to load into compatible apps and devices.

How to get a POI file on your phone

Since POI files are GPX files this is exactly the same as getting a GPX file onto your phone. Refer to the Using GPX files page for details on how to store and load POI onto your device.
I share all my files via a cloud storage service such as Dropbox or Google Drive as that works the easiest for me.

How to show Points of Interest on a map

Once the file is on your device you can load the file into your navigation app and set it to show on the map along with your route or track.

1. Open the menu in the lower left corner and tap ‘My Places’ in the menu that pops up.
2. In My Places, select ‘Tracks’ and all your imported routes and files should be listed there.
Imported tracks or routes may be in a expandable subfolder.
3. Behind the track name a toggle switch should show. Enabling this makes the POI show up on the map.
4. Go back to the main screen (Map) and the Points of Interest should show up as colored icons. 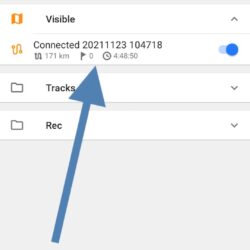 Unfortunately the BMW Connected app does not support Points of Interest other than what the app already has by itself.

1. From the main screen tap the folder icon on the side.
2. In My Collections, select the route POI folder and tap the ‘eye’ icon behind each item you want to be visible.
Counterintuitively the eye icon should have a / through it, indicating the file is shown on the map 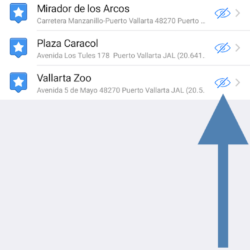 You can load the POI as if you’re loading a route file and it will show up alongside the route file.
Since POI files only have locations, this will show as a bunch of icons for each location.

You can load the POI as if you’re loading a route file and it’ll show alongside the route file.
This way you can load as many files as you want and manage them from Settings, in the Tours section.
Since POI files only have locations, this will show as a star icon for each location.

What is included in Point of Interest files?

The points of interest available with most routes on MotoTravel usually contain fuel stations on strategic points, commonly every 200km or so. Attractions along the way. Checkpoints, tollbooths and roadblocks along the way. But also sometimes restaurant and hotel recommendations. If a road didn’t exist, was impassable or the map is inaccurate that may be noted in the POI file as well. Often with a remark or suggestion in the ‘comment’ field of the POI marker.

Likewise, official maps do not show the locations of illegal roadblocks or dangerous spots. If I encountered such a place I put it on the map, this will help prepare you for the adventure and hopefully gives a sense of readiness and security.

Points of Interest are of-course super handy in areas where you are not familiar with the roads or available services and do not have internet to look things up. Imagine needing fuel and having no internet to find a nearby fuel station.

That said – the Point of Interest files are not exhaustive resources and probably won’t include every fuel station, restaurant or hotspot along the route. Usually I highlight places that I’ve visited or used myself and not just copy them from Google Maps.
This also means that just because I didn’t put a fuel station or restaurant on the map, it doesn’t mean there is nothing available.

Waypoints are a type of marker used in some GPX files. Most notably indicating the end of route or track segments or town names, route turns and similar in-route places. Points of Interest are special kinds of Waypoints commonly used for landmarks, road hazards and other important things that aren’t necessarily part of the actual route.
For example: The entrance of a nature reserve would be a waypoint as your route leads up to it. But the actual park and noteworthy spots in it will be Points of Interest.

On the MotoTravel website I do not provide Waypoints for two reasons.
1. Navigating without waypoints means the adventure is more your own to experience. If I (the route) constantly holds your hand with where you are, telling you what’s what with waypoints, things can get predictable and boring real quick.
2. Not using waypoints is a more basic approach of just a bare track or route as this is more widely supported and has less things to go wrong.

If you need help with GPX files you can ask your question via the contact form.