If your navigation does not support routes you can still make use of the bought GPX routes by pairing the Points of Interest file with your free track download.

The route or track does not cover the road

I have noticed that too from time to time. The recorded tracks and routes are my actual location based on GPS coordinates. So if the map shows you going through bushes or next to a bridge, the map imagery is not lining up with reality. 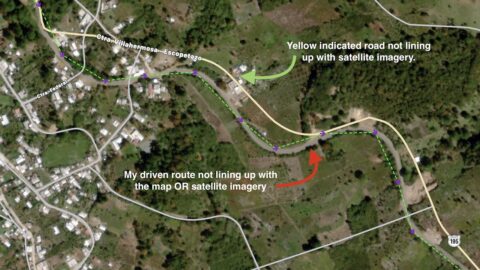 My app says the file is corrupt or unreadable

Try downloading a new copy of your track or route. Also make sure the app you’re using does actually support GPX files and not just it’s own variant of it.

Often this kind of error is used as a generic error for incompatibility issues too. It doesn’t necessarily mean the file is wrong or broken. Contact the apps developer and see if the track or route should be compatible. Try a different app if the issue persists.

How do I know the routes work before buying them?

If you’re not sure if your app or devices supports Routes you can try and test these demo routes first. Download the Mexico test route or Philippines test route here.

These routes are made in the same way as every other route on this website so if these work. The rest will too.

Are tracks and routes reversible

No, unless it’s noted on the product page. Recorded routes and tracks always follow the position of the rider. Thus, going the other way, the line would be on the wrong side of roads, highways and going over the wrong lanes on intersections, this causes confusion and dangerous situations. However, some generated routes or tracks can be reversed as they follow the middle of the road. Keep in mind though, that if the route goes over a highway you’ll be directed into oncoming traffic and intersections may be confusing and dangerous as a result. As a general rule I never recommend to reverse a track or route unless the product page states you can.

If you need help with GPX files you can ask your question by using the contact form.